Music to my ears

.
Bright and early yesterday I walked over to the Meitar Regional Council office to have my Israeli identity card changed to my new address.
Yay! Now I am an official resident of the Negev and of Meitar.
(It is pronounced  may [like the month] + tar, accent on the tar, so:  may-tar' .)
Hmm, would that make me a Meitarite?
Dina of the Desert?

The secretary said I was in luck because at 4:00 there would be a festive ceremony to re-open the newly-renovated Moadon LaGil HaZahav,  literally the Golden Age Club. 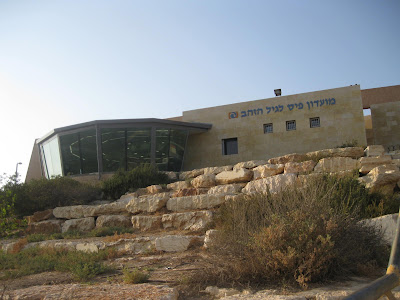 OK, so I dutifully walked back over there in the  35 C/ 95 F heat of mid afternoon.
The new glass wing of the clubhouse really IS impressive.
What a view! 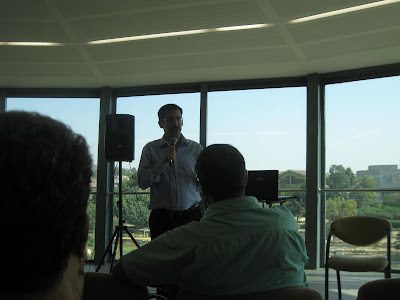 He predicted that the old-new clubhouse would be full of cultural and learning  activities.
Once Meitar gets its own high school, he  added, they want to open a class for retired people.
The group would have classes all morning taught by the high school teachers, and several times a year "stars," visiting professors and experts, would come to lecture.

Orbach also gave a hint that his Ministry is working on starting a Shnat Sherut for retirees, a year of volunteer service, complete with certain benefits!
Until now, this  Sherut Leumi year of civic service was meant for young people who, because they are Israeli Arabs or very observant Jews, are normally exempt from compulsory military service;  it gives them a chance to serve their country and be recognized for it. 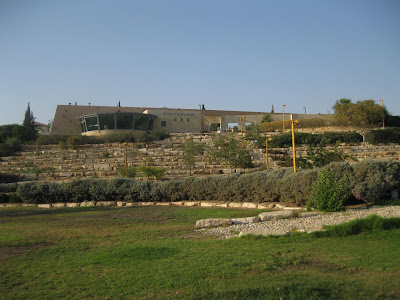 Meitar, founded in 1984, is a community built around good education, cooperation between the religious and non-religious and young and old, volunteerism, and general quality of life.
Here above is the Moadon LaGil HaZahav as seen from the wadi, where a nice park and playground have been built. 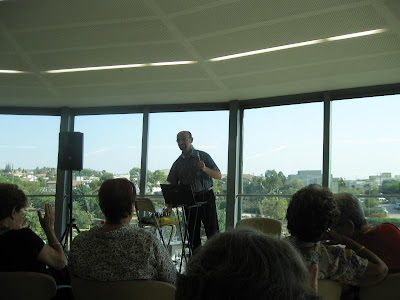 A local rabbi and of course our Regional Council head Avner Ben-Gera also spoke to the audience.
But the best part was the man in the photo, Anatoly Lain, an Israeli born in Russia.  What a singer!!
He started with La Traviata.  Hear him on YouTube (at a different venue).

Anatoly gave us an hour and a half, if not more, of  arias, old Israeli Hebrew songs, and a few Yiddish songs too.
But the most moving was what he sang in Russian.
What could be more touching  than a baritone singing soulful songs from old Russia.
.
.
(You can enlarge the photos 2x.  The desert sky is for SkyWatch Friday.)
.
Posted by Dina at 7:02 PM

That's it! When I come of age, I will retire in Israel! Very smart government to engage the whole population to volunteer, participate... I bet you don't have cry-babies in Israel! I took 3 months of russian before going to Russia few years ago. I thought it was the warmest, more thoughtful language. Checking Anatoly now on "you tube". Thank you Dina!

You arrived in Meitar at the right time: parties, ministers an opera singers! That was obviously in your honor, but you are too shy to admit it...

In the UK we tend to ignore the old all to often.
Good job those of us over 60 still get about!
Israel is doing a great job there, if of course plans actually come to fruition.

A citizen of the Negev Desert, how cool is that?
And I'm sure you're glad you walked back through the heat for the ceremony, and the wonderful singer.
And, no, Canada doesn't have a Minister for Senior Citizens. In fact, our federal government is thinking Canadians should work longer and retire later, since they're living longer anyway. That's fine if the people are healthy, but many aren't. We definitely need a Minister for Senior Citizens!
K

Yes, Dina of the Desert is great! Would make a good blog title.

May you enjoy many blessings in your new home Dina.

We treat the older people miserable here in Norway and I do not think we have a minister for the elderly.

In Negev desert.. must be wonderful!

Wouldn't it be wonderful of some people over here would take a lesson from your Minister for Senior Citizens! I think Dina of the Desert has a nice ring to it.

Gracious! Your new home is sounding better and better all the time, Dina. I'm so glad you found such a wonderful place to live.

It seems you enjoy very much your new home, that makes me happy.
Dina of the Desert sounds good :)

Friends, thanks for all your good wishes.

Birdman, yes, everyplace in Meitar has air conditioning. Except outside. I am one of the very few who have no car.

I'm glad you enjoy your new home, Dina! The images are so interesting.

Travelogue for the Universe said...

Meitar sounds like a wonderful community! I'm very happy for you.

Dina of the Desert has a nice ring to it. :)

Fabulous architecture! It seems to be a mix of Frank Lloyd Wright and Oscar Niemeyer.

I like the name Dina of the Desert too.
Did that stick?