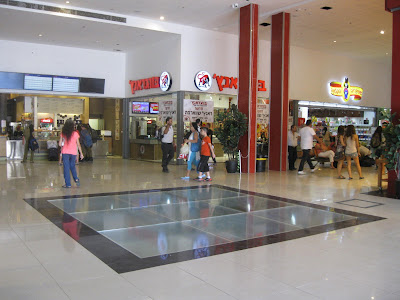 The newly redeveloped  Beersheva Central Bus Station gets a lot of foot traffic.
But the floor is clean and shiny enough to reflect the signs of Burger Ranch, CocaCola, and Little Switzerland.
Good for James' Weekend Reflections. 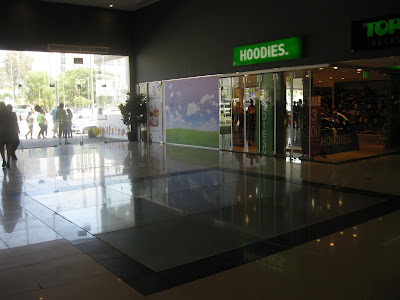 This special part of the floor is right next to one of the entrances to the bus station. 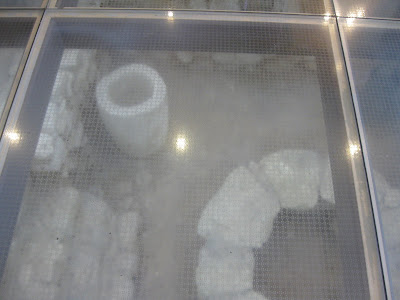 Look what's under the glass floor--antiquities!!
Found a year or two ago just one or two feet below surface, in a rescue dig! 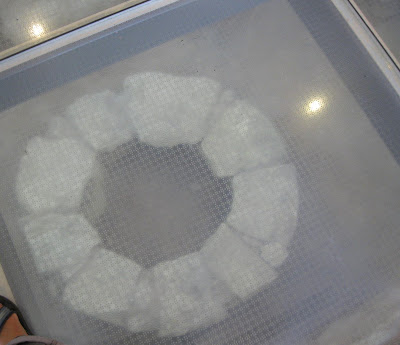 "For Byzantine Beersheba, this was it,"  according to Dr. Daniel Varga, excavation director for the Israel Antiquities Authority, who conducted the dig. "This was the heart of the Byzantine city, right here. Two Byzantine churches were built within a radius of 300 meters from here, and right over there was the Roman military camp."

The bustling Byzantine city of Beersheba was home to several thousand people and a popular stopping place for Negev travelers.
Surprisingly, most of the rooms were empty with no signs of destruction, suggesting that the residents left the area of their own accord.
The Byzantine site is remarkably well preserved due to centuries of abandonment following Arab invasions in the seventh century C.E. and recent coverage by the old bus station itself.
(The Muslim conquest of Palestine was completed in 640.)

The dig information here comes from Travelujah and Bible History Daily articles from 2012.
.
P.S.  See my post on the Roman Tenth Legion  for a similar way of preserving antiquities under glass, under Jerusalem's International Convention Center.
.
Posted by Dina at 6:50 PM

That's amazing and pretty cool to see history right under your feet.

That's a great idea to preserve ancient ruins despite building a mall...

Reminds me of the City of David.

such a beautiful presentation... great job...

This is my favorite kind of stuff. It's great preservation work, and I hope it will inspire people to preserve the past.

I love it! There is soooo much history everywhere under everyone's feet in Israel. The builders of this site preserved in the bus station would surely be astounded if they could see it today.

It really is amazing to live in a country with so much history every where you turn.

Your stories are always so interesting. Under a bus shelter - amazing!

It is good to see ruins that can be easily admired and protected without getting in the way of everyday life.

Antiquities? At first glance, I thought that was a roll of toilet paper. Sheeeeesh! I need new glasses, I guess.

This is wonderful. Some bank buildings at downtown Lisbon have it over Roman ruins.

A great way to preserve things.

Now that would appeal to me! I wondered from your current link what you might mean...

Hi Dina,
I have been to Beersheba Springs, Tennessee and had never heard the name before. Tom The Backroads Traveller