More on our only lion's death 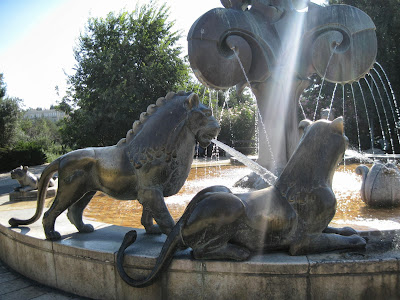 Last night  I quoted the Biblical Zoo's announcement of the death of Jerusalem's only male lion.

Tonight The Times of Israel has Lider's death as their top story (well, I mean at the top of the page).
Please see their article, "Lider, the lion king of Jerusalem, dies at 16."

From it we learn that  Lider "was put to sleep last Thursday after veterinarians and keepers decided that his difficulties in walking and standing, brought on by chronic back pain, were insufferable."

The paper also informs us that

Asiatic lions are an endangered species, with only around 300 left in the Gir Forest Sanctuary in India and another 330 in captivity.   Zoos around the world are engaged in a breeding program to try and save the faltering species from extinction.
However, with the relatively small number of Asian lions available – by comparison there are over 1,600 African lions in captivity – inbreeding is common and as a result many of the animals have genetic disorders affecting their health. Lider himself was born sterile as a result and an illness that afflicted his nervous system was likely brought on by genetic problems.

The animals in the Lions Fountain  will hopefully live forever.
Germany donated the fountain to Jerusalem in 1989.

The lion of Judah is the official emblem of the City of Jerusalem so we have a special place in our heart for lions, living or dead.
.
(Linking to Our World Tuesday.)
.
Posted by Dina at 9:50 PM