.
For better or for worse,  Beer Sheva is called our capital of Brutalism.*
And the city's Ben-Gurion University is full of Brutalist architecture.
BGU's main library, for instance, whose cornerstone was laid in 1971. 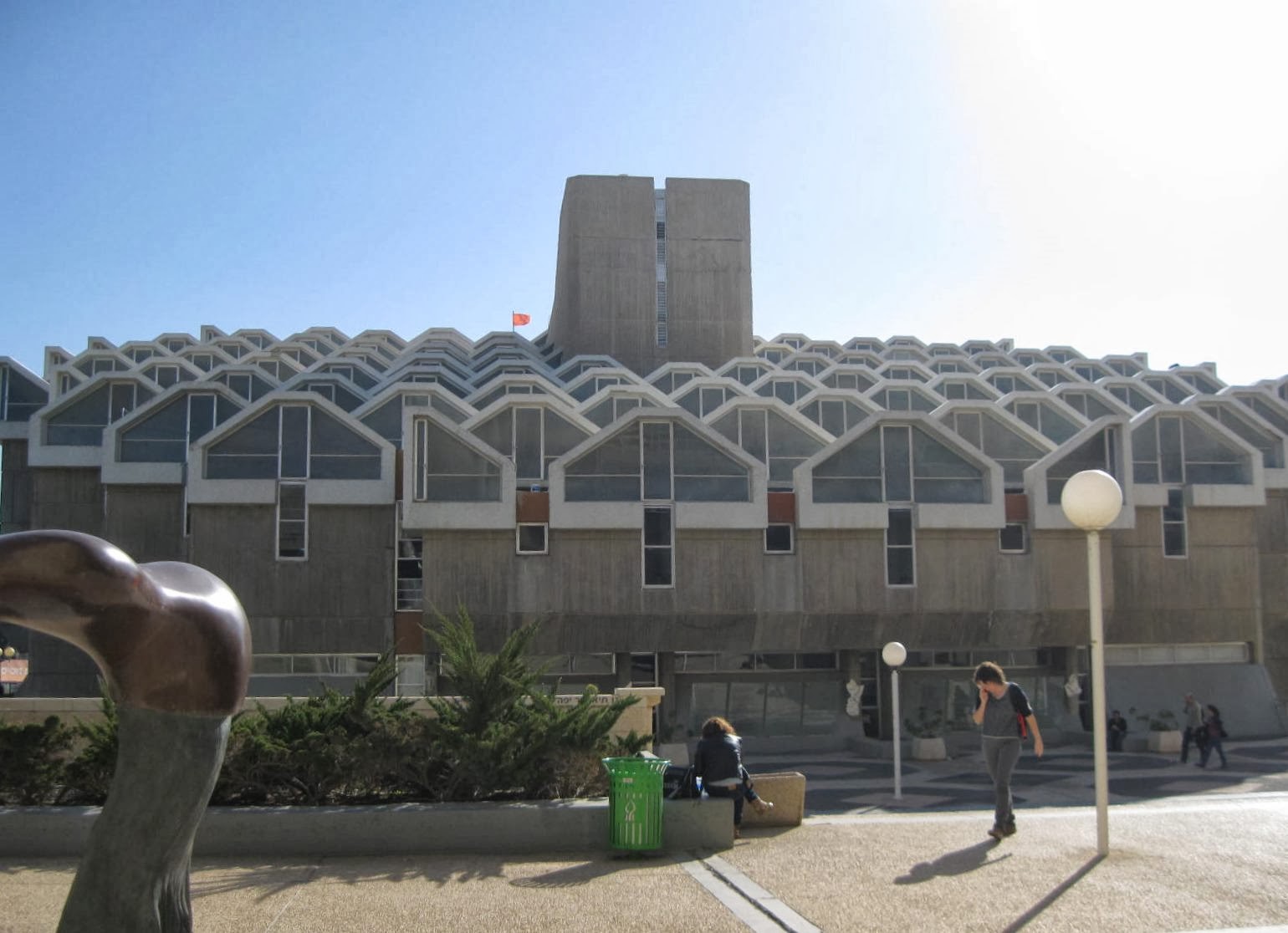 
In designing the library building, the architects wanted to bring several ideas to life:
The building was planned to be washed in natural light – present in abundance in the Negev - which,  diffused from the North (to eliminate the direct rays of the sun),  floods the library's reading areas. . . .
The combination of concrete, dark in appearance and representing durability in desert conditions,  and gleaming cupolas made of glass mosaic, expresses the blending of material with light. 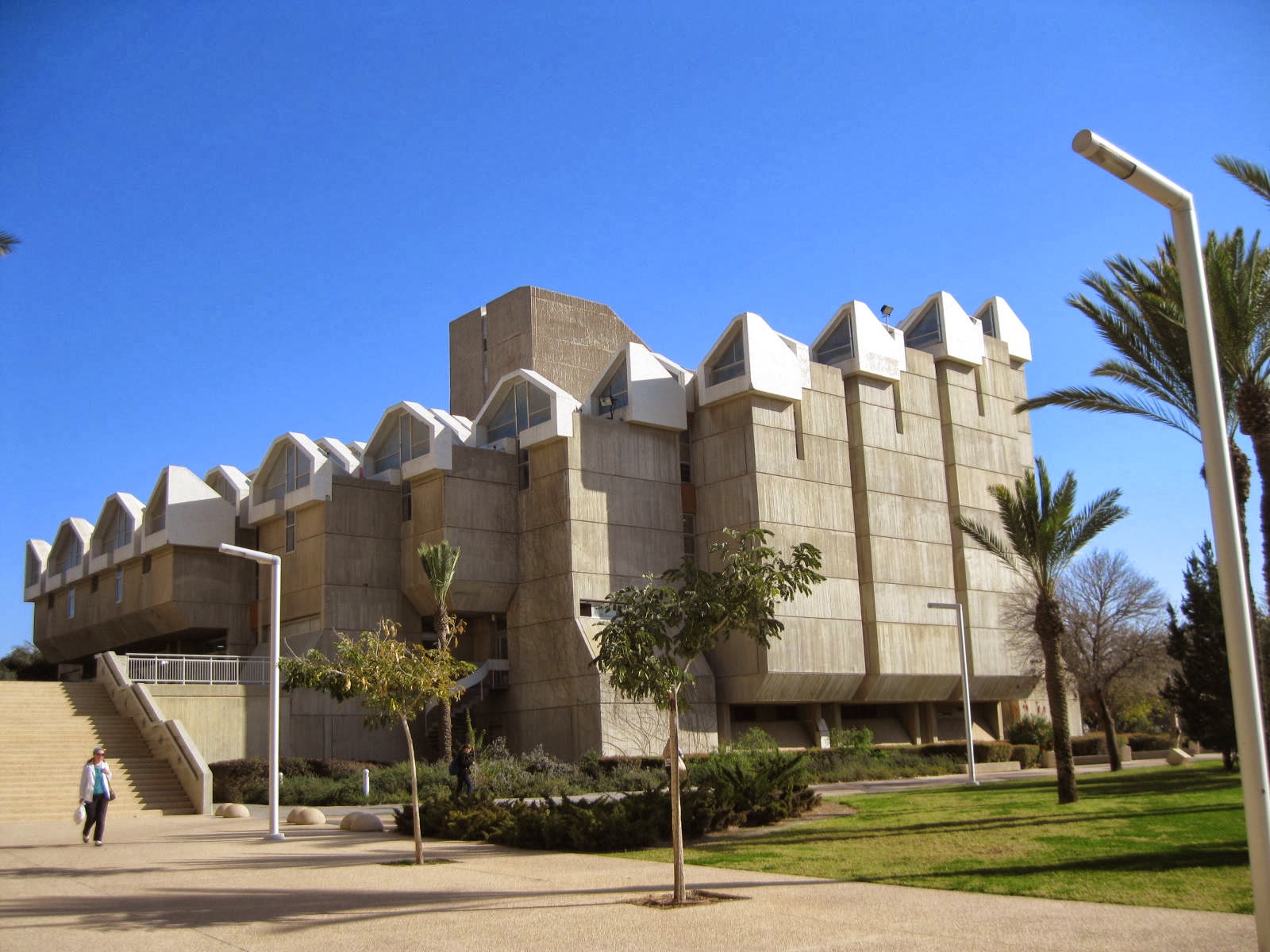 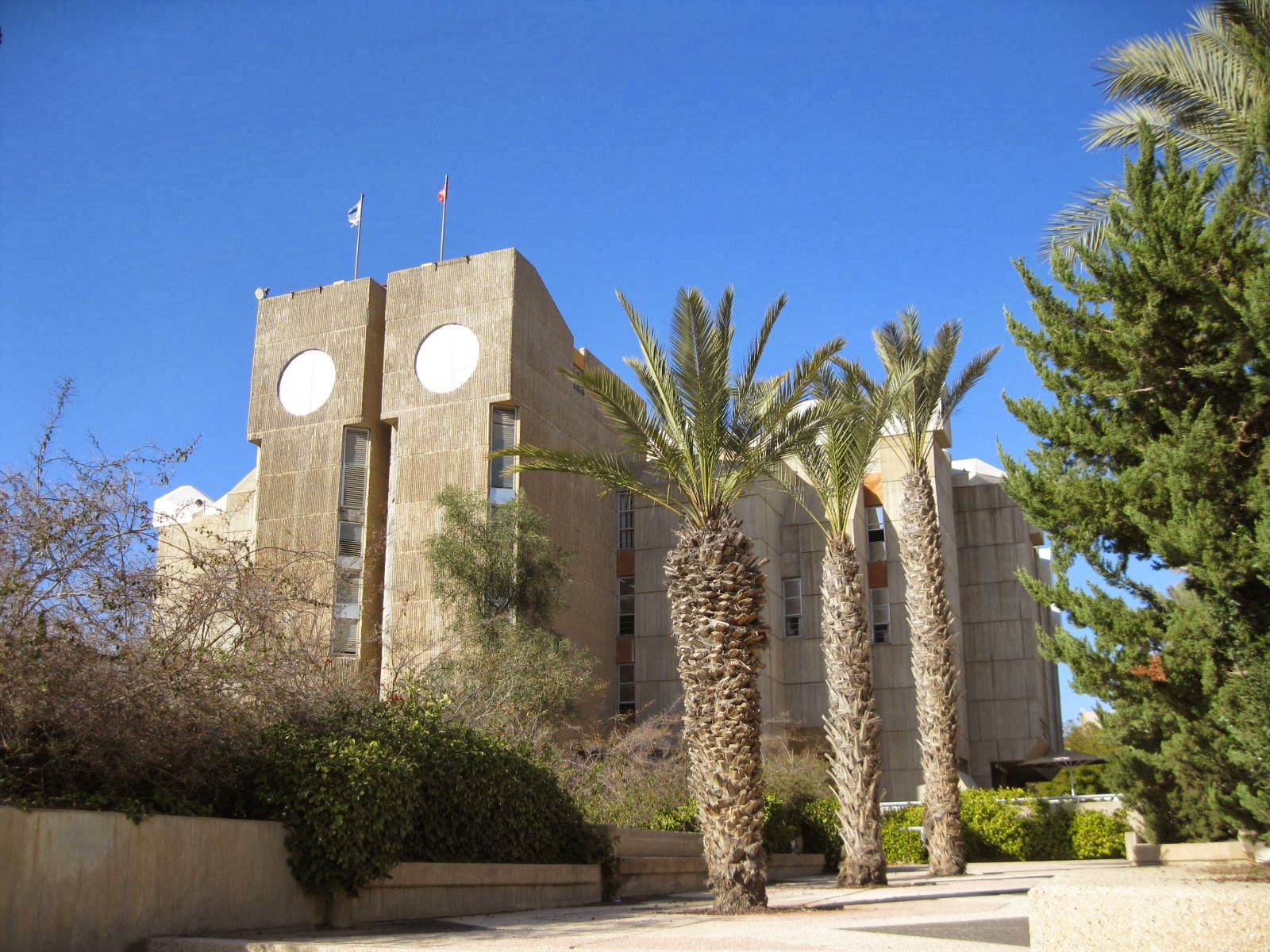 Here is the back of the library.


The English architects Alison and Peter Smithson coined the term in 1953, from the French béton brut, or "raw concrete", a phrase used by Le Corbusier to describe the poured board-marked concrete with which he constructed many of his post-World War II buildings.
. . .
Brutalist architecture is a style of architecture that flourished from the 1950s to the mid-1970s, spawned from the modernist architectural movement. Examples are typically very linear, fortresslike and blockish, often with a predominance of concrete construction. Initially the style came about for government buildings, low-rent housing and shopping centres to create functional structures at a low cost, but eventually designers adopted the look for other uses such as college buildings.

UPDATE: Here is a nice new article about the beauty of Brutalism.
.
(Linking to ABC Wednesday, Whimsical Windows, Delirious Doors, and Our World Tuesday.)
.
Posted by Dina at 7:31 PM

I am not a fan of this kind of architecture, but this is not as bad as many examples we have here.

**** VP said exactly what I was going to say. This isn't half as bad as most of our stuff.

We've got our share of what on earth were they thinking kind of buildings...

I've never heard of Brutalist architecture. So if someone is being brutal, he's being hard like concrete?

Friends, thanks for your reactions.
I guess a few Brutalist buildings would be OK, but not a whole campus or a whole city full of them.

Kay, I like your interpretation. :)
I see that brute did originate in Middle French, so there is a connection to the modern French brut.

dictionary.com says this:
brute
early 15c., "of or belonging to animals," from M.Fr. brut "coarse, brutal, raw, crude," from L. brutus "heavy, dull, stupid," an Oscan word, from PIE base *gwer- "heavy" (see grave (adj.)). Before reaching English the meaning expanded to "of the lower animals." Used of human
beings from 1530s. The noun is from 1610s.

Thar example of the J Edger Hoover building in the Wikipedia article was familiar ... it was shown in a lot on episodes of The X-Files :)

Not so my taste of architecture !

Dina, I did notice that Blogger was having a hiccup a couple of days ago. It seems OK today although I goofed on my scheduling so my post didn't go up on time. A lot of Bloggers have been complaining about problems though.

The architecture is amazing! Glad you posted the second shot to give us a better idea of the whole concept.

Those are cool, from afar :) Thanks for sharing them with us, they're quite different from the views I'm used to seeing here in Gush Etsion!
(By the way, I don't think you submitted your link on WWDD, do you want me to do it for you?)

A different yet fascinating style of architecture that I'd never heard of before.

This is a version of architecture I never heard of before either.
Thank you for the information and interesting photos too.

Visiting from ABC Wednesday. I enjoyed the architecture lesson here today. This is something new to me...

I hadn't heard of this architecture before. It's not half as bad as the comments seem to imply.

The first picture looks like people screaming. It seems aggressive.

Thank you for this; I never knew what this style was called. Fascinating to see.

I think it's cool! We will soon have a new library here in Grimstad (not that I know that we need it), but it is unlikely anything like this.

The brutalist architecture is new to me. The buildings look interesting, and concept sounds very environmentally friendly.