The Israel Trail -- so close to home 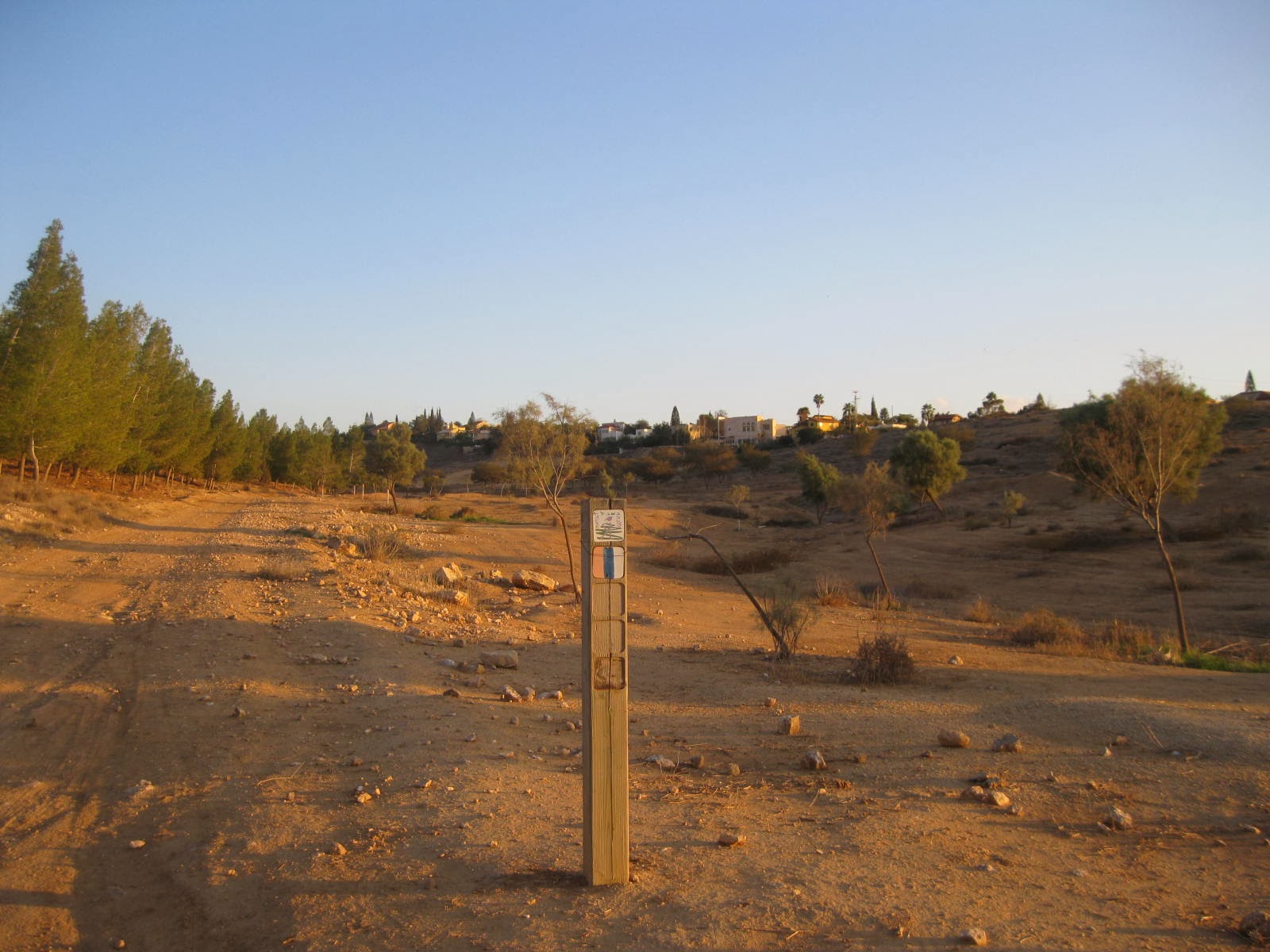 
The Israel National Trail, (Hebrew: שביל ישראל‎, Shvil Yisra'el) is a hiking path that was inaugurated in 1995.
The trail crosses the entire country of Israel. Its northern end is at Dan, near the Lebanese border in the far north of the country, and it extends to Eilat at the southernmost tip of Israel on the Red Sea, a length of 580-620 miles (1000 KM).
The trail is marked with three stripes (white, blue, and orange)  and takes an average of 45-60 days to complete.
The Israel National Trail has been listed in National Geographic's 20 most "epic trails."
It is described as a trail that "delves into the grand scale of biblical landscapes as well as the everyday lives of the modern Israeli." 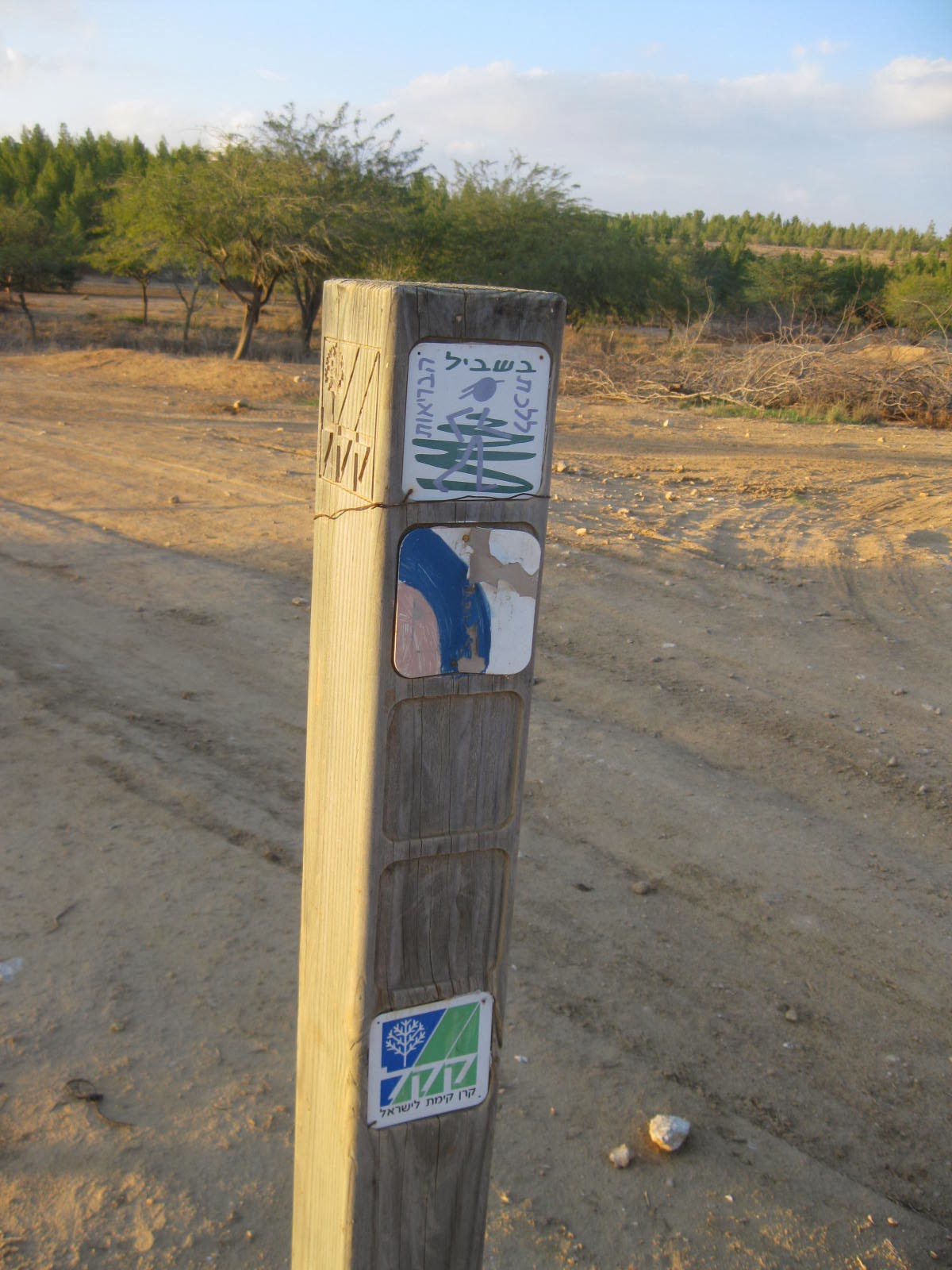 Here there is a play on words:
Lalechet beshvil / bishvil  habriut =
Walk for health / Walk on the healthy path.
.
(Linking to SkyWatch Friday and Signs, signs.)
.
UPDATE:  More info at http://www.natureisrael.org/INT

and a Trail map at   http://www.natureisrael.org/cms_uploads/Israel%20National%20Trail%20Documents/IsraelNationalTrail_map.jpg

That is a good idea, and it's had a number of years now to gain a foothold among the public.

I would love to walk that walk.

The idea of a nation-long trail is perfect, but I am not walking 1000 ks for anyone! Would it be possible to do the trail on bike or horseback instead?

This would be worth a walk.
Happy weekend, Dina.

Very interesting, I didn't know anything about this!

I just showed your post to my husband Dina, he's really into walking.. Last year he walked the Bibbulmun Track.. link below

it just pips the Israel Trail by 3 kilometers :)he walked it in five weeks, quite a challenge. Now i must go and google it to see if it's on the Nat. Geographic 'epic trails' list :)

Perth DP shalom. Your husband walked the Bibbelmun? Good on him!
A friend did that and what a difficult way it was. See my post about her:
http://jerusalemhillsdailyphoto.blogspot.co.il/2010/10/new-blog-is-born.html

Hels, I suppose it could be done on horseback or mountain bikes, but I have to check that.

Kay, I have only walked on the Trail in little bits, as part of other hikes. Yeah, it would be nice to take the challenge, but not alone.

VP, well then, it's time for a refresher course/visit in Israel.

Friends, wish you could all come and we'd walk together.

It's so beautiful the light in the top shot!

It can't be made any simpler than that.

Wow - what a trail! I'd be doing it in small bits too!

Unaware of this trail 'til I've read it about it here. Currently reading a fascinating book, My Promised Land, by Ari Shavit. . .an excellent read.