The Struma synagogue and museum

.
Here is another of the three  Beer Sheva synagogues we heard about during Israel Heritage Preservation Week.
Last week for Shavuot  I blogged about its beautiful Torah scrolls and the colorful tablets of the Ten Commandments glass door. 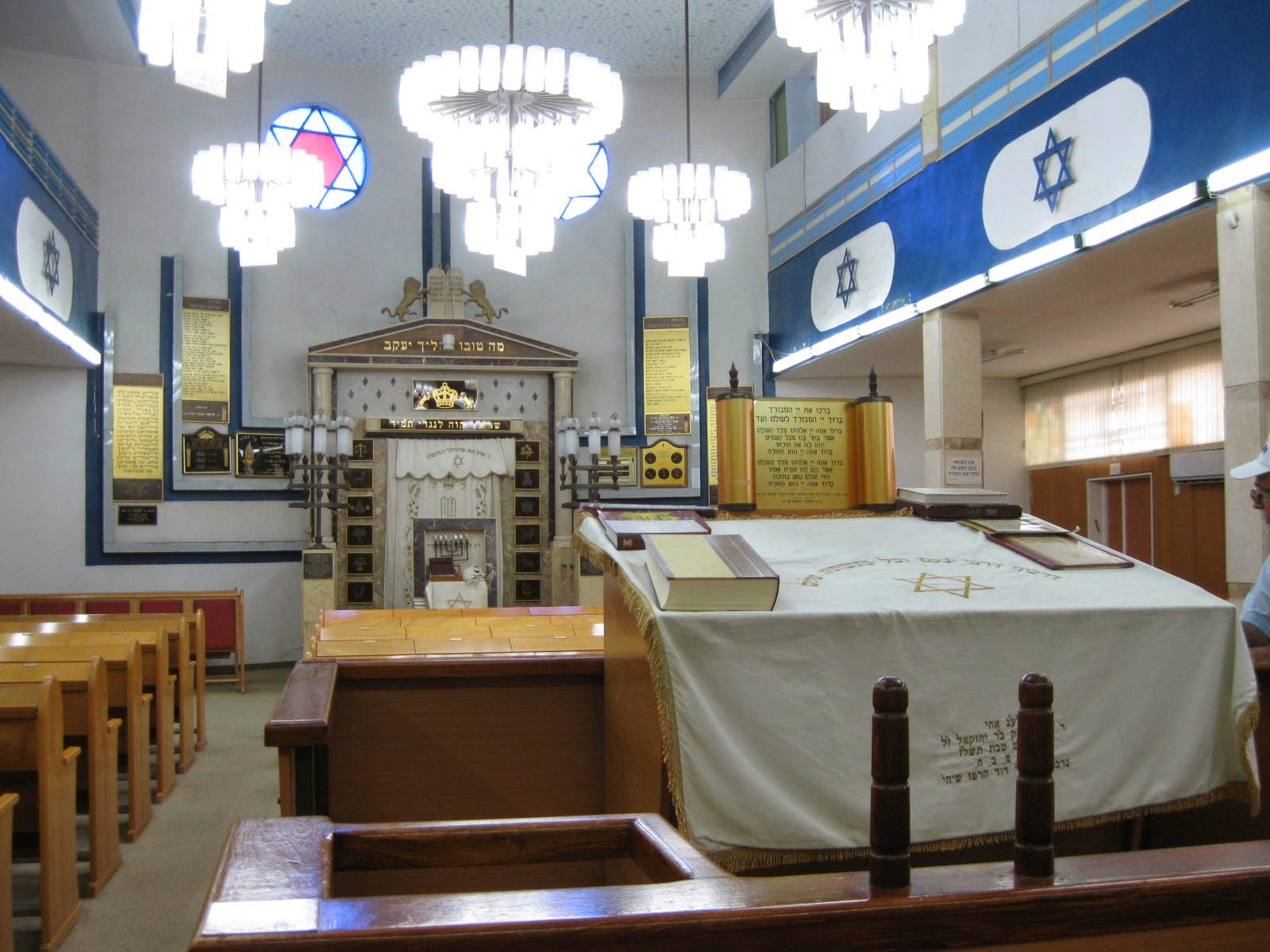 The bima, where the Torah scroll is unrolled and chanted, is in the center. 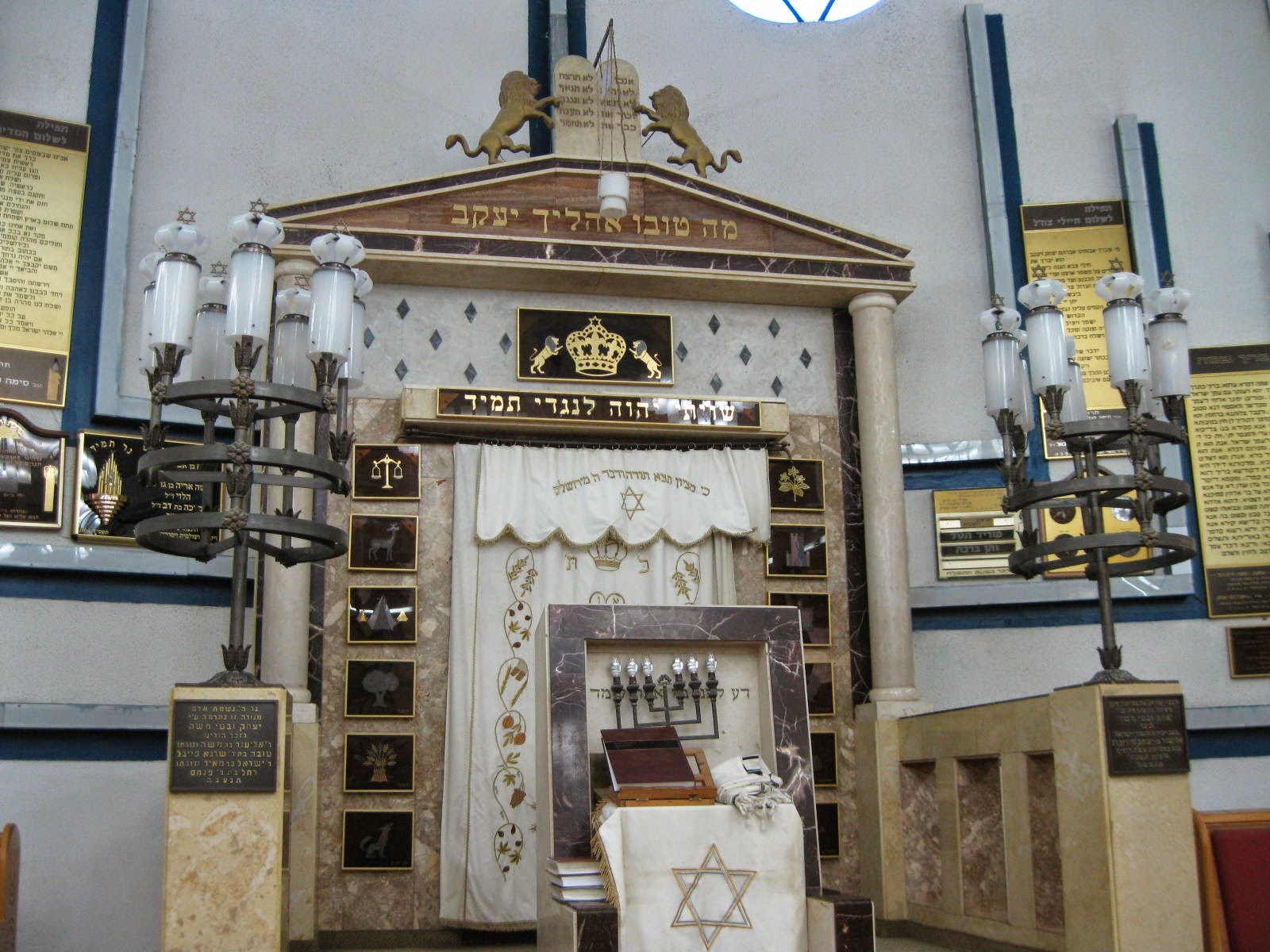 But the pulpit is right in front of the aron kodesh, the Torah ark. 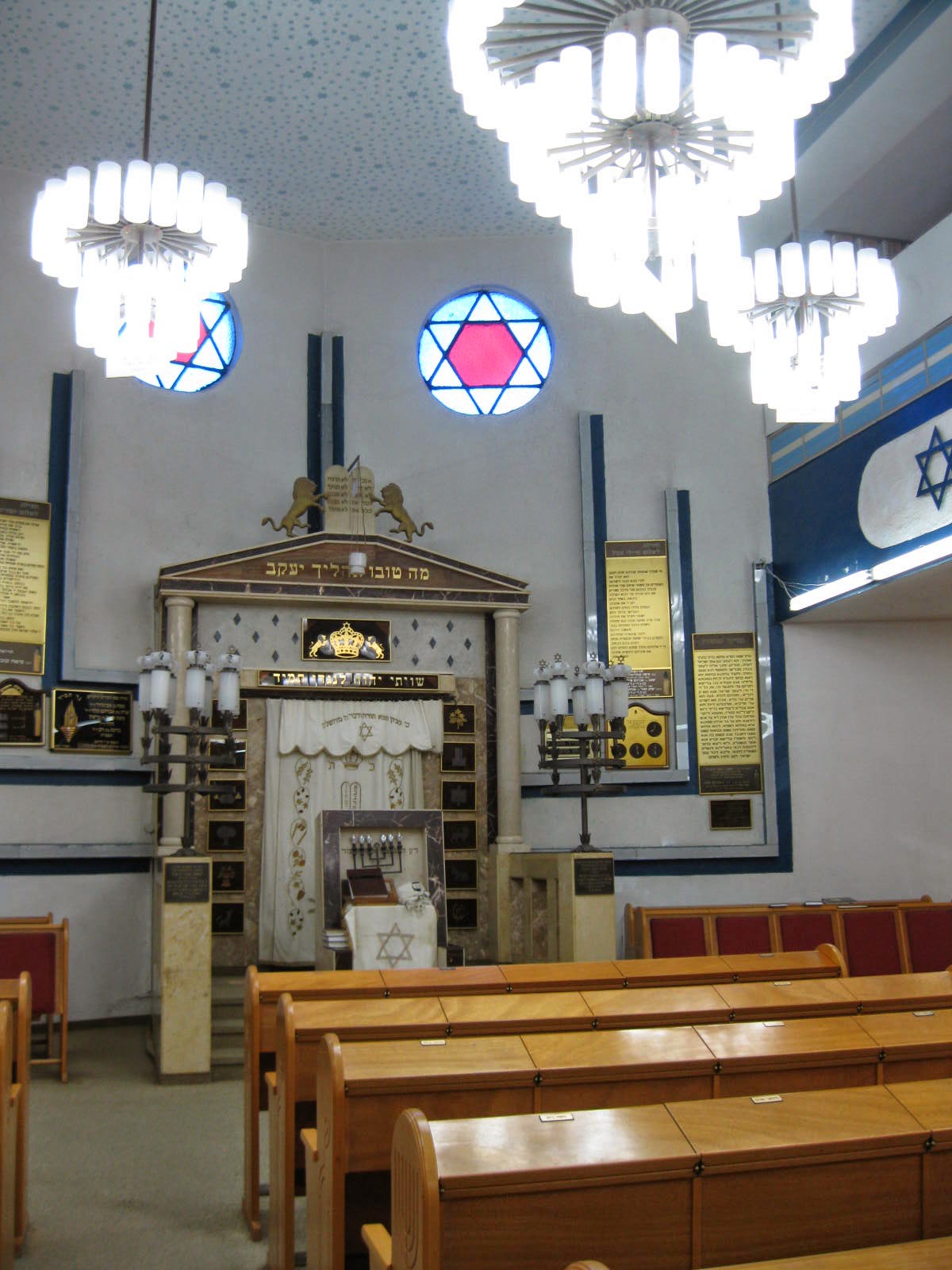 The pews are forward-facing, typical for Ashkenazi synagogues (and not like the ones we saw in yesterday's post. 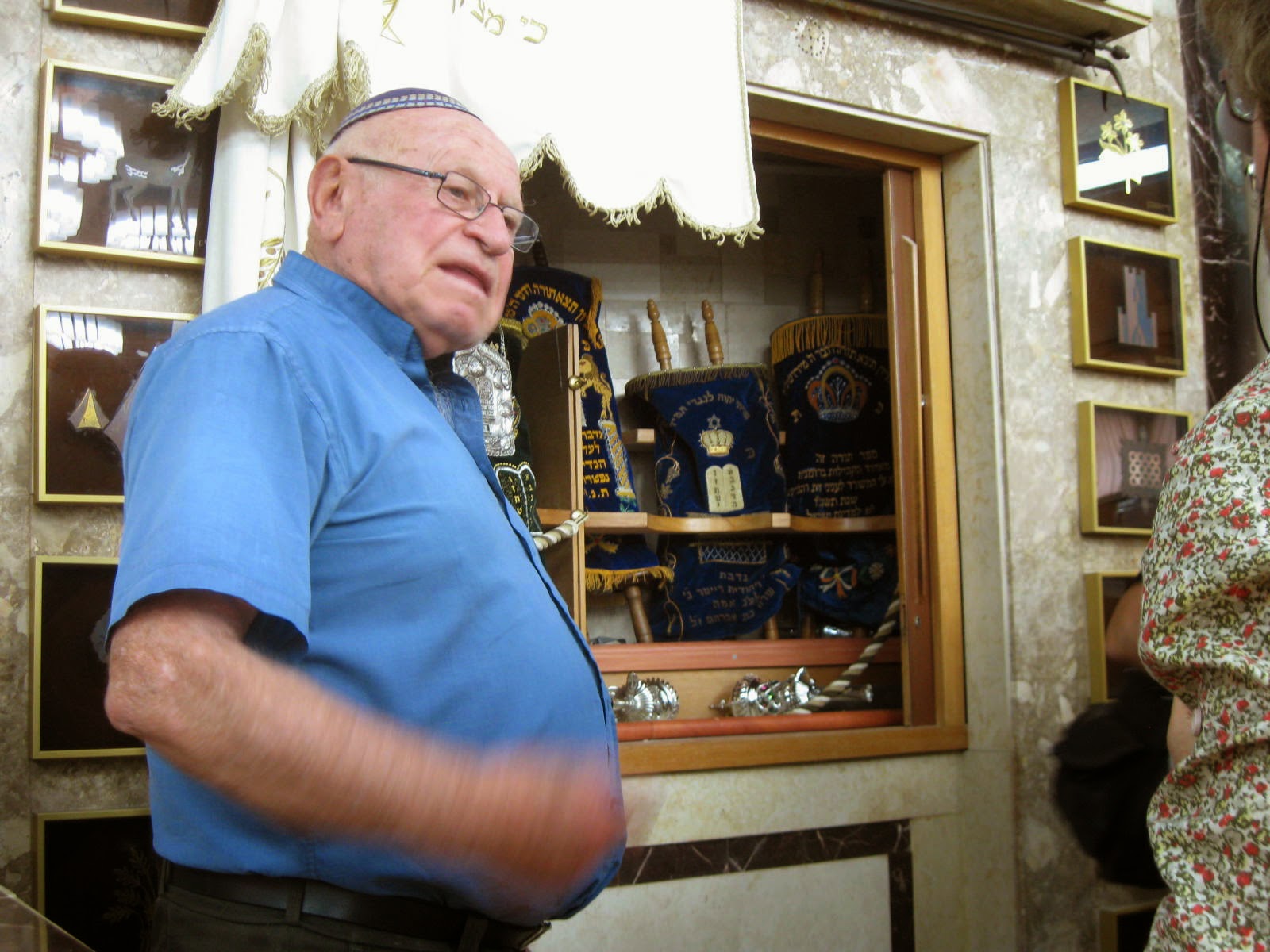 Arie Raiter, President of the Struma Museum and Synagogue, one of the founding members of the congregation, told us all about the history of the building.

If you look at the photos again, you might see that the front of the sanctuary has like the ribs of a ship's bow and along the side walls are "portals," like windows of a ship.

One story made the biggest impression on me (members of the tour group, Israel heritage lovers, also rolled their eyes):
Once he caught two neighborhood boys throwing stones at the windows.
He asked them "How can you do such a thing to a synagogue which is named in memory of the holy Jewish martyrs of the sunken ship Struma?!"
But they didn't know what he was talking about.
He took one to the boy's school and confronted his teacher; to Arie's dismay, the teacher had never heard of the Struma.
He then went to the school principal but  was shocked that even she did not know the Struma. 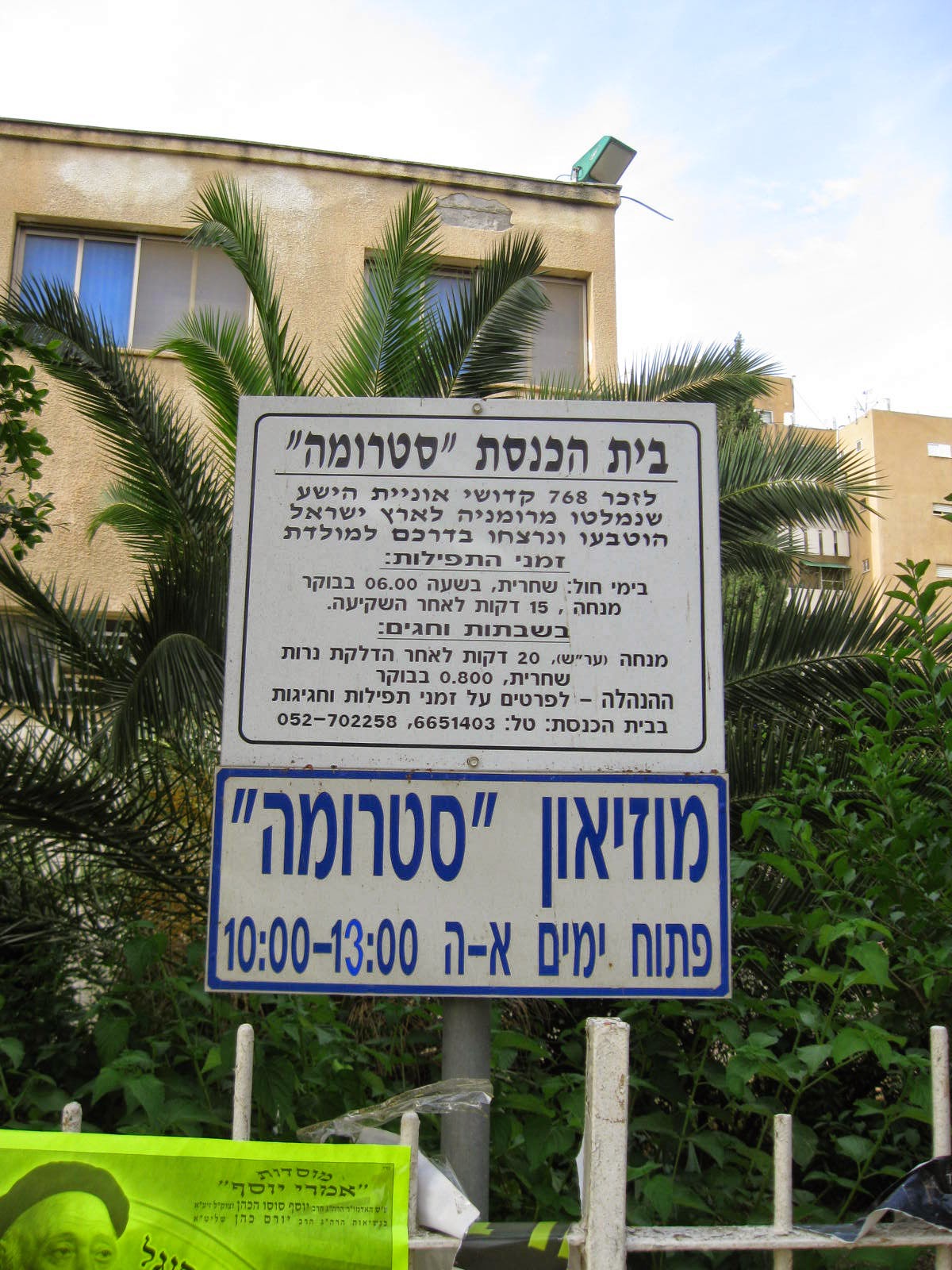 I think that is when he saw the need to put up explaining signs outside and also to make a library of Holocaust books and a history museum about the Struma on the top floor of the synagogue.

The 1942  sinking of the "illegal" immigrant ship was a tragic and seminal event which shaped the ethos of the not-yet-independent state of Israel.
For the founding generation of Israel it signaled their mission to reach a position of strength so that such injustices against Jews could never again be carried out.
But it is a modern tragedy that younger generations apparently are not being taught about the Struma and its lesson for us.

On December 12, 1941, 769 Jews boarded the Struma in the Romanian
port of Constanta. They had been witness to the massacre of Jews in
Bessarabia and Bukovina, and were desperately trying to escape Europe. The
Struma's first stop was to be Istanbul, Turkey---despite the fact that the
passengers had no visas for Turkey. The boat was hardly seaworthy, and
barely reached Istanbul. When it finally arrived, the passengers were not
allowed to disembark. For ten weeks, they were restricted to the boat. The
Turks refused to transfer them to a transit camp on land, even though the
camp would have been funded in complete by Jewish organizations. In
addition, nothing could convince the British authorities to admit these refugees
into Palestine, because they did not want to set a precedent for similar
escapes.
On February 23, 1942 the Turkish authorities took matters into their own
hands: they towed the old ship to the open sea, without fuel, food, or water.
Within hours, the ship was torpedoed, most probably by a Soviet submarine
that mistook it for an enemy German ship. All but one refugee drowned.

I had no idea... what a tragic story. Thank you for sharing it.

What strikes me, looking at the synagogue, is how light the interior looks.

That is so heartbreaking! Both the story of Struma and the fact that no one remembered it.

thank you Dina. i read your blog every day and it is so educational and entertaining. whether moving stories about important fact like today or just everyday pictures taken around your area. every blog is always interesting. thank you Dina again and shalom. Fran

Oh my gosh! That is so heart breaking and so evil. I'd never heard about this.

I never entered a synagogue
thanks for the visit

Those brave guys on the submarine missed every valuable target they tried to torpedo: their only 'success' was the Struma, and soon after they ended up on a mine...

Both this and the previous synagogue are very interesting. Once in Prague, I was caught taking a shot at the interior of one so, when I went to attend a concert at the absolutely amazing Spanish Synagogue, in Prague too, I didn't dare even trying doing so... :-)

Reading about the Struma makes me think if the story of the St. Louis ... http://en.wikipedia.org/wiki/MS_St._Louis ... :(

I learn so much from your postings.Again, why the name Beer, I'm sure there is nothing to do with the beverage. hehehehehehehehe

Very interesting, I vaguely remember something of the Struma story but couldn't say from where. Such a shame when heritage and history are lost like that and in such a short time.

That was a sad story to read but good to know. Thanks for all the details you shared about the temple.

That's the first time I've heard of the Struma. What a terrible tragedy for those poor people. Lovely photos of the Synagogue

Sadly nothing surprises me anymore. This kind of thing is still going on today. In the Mediterranean a refugee ship was thrown some water bottles from a military helicopter instead of the desperate refugees being rescued by nearby ships who saw them they were left to drift finally ended up after many days on a beach in Tunisia with only a handful still alive.

For more information on my previous comment search for video "Liquid Traces - The Left to Die Boat Case" or visit my blogpost titled 'So You Think You Have a Right to be Rescued.'

Quite somthing to see inside this one, very nice