The Ubiquitous Nachman of Uman

.
Today's letter for ABC Wednesday is U. So it should not seem unusual for us to post about the ubiquitous Nachman of Uman, Ukraine.
. 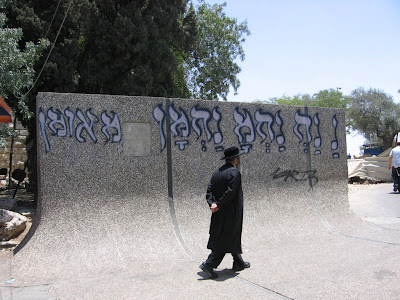 Nachman of Breslov (1772-1810), a great-grandson of the Baal Shem Tov, was the founder of the Breslov (or Bratslav) branch of Hasidic Judaism.
. 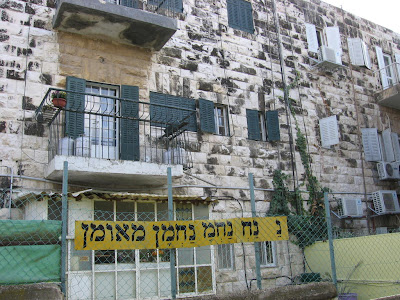 " The Breslov approach places great emphasis on serving God through the sincerity of the heart, with much joy and living life as intensely as possible.
Its Hasidim see Torah life as the means to a joyful existence, and their approach to worship is very personalized and emotional, with much clapping, singing, and dancing. . . .
Besides the regular daily services in the synagogue, Rebbe Nachman advised his followers to engage in hitbodedut (literally, "self-seclusion") on a daily basis.
In this distinctively Breslov practice, the individual Hasid engages in a free-flowing verbal communication with God for one hour a day.
During hitbodedut, the individual pours out his thoughts and concerns in his mother tongue, as if talking to a close personal friend.
The goal is to establish a close, personal relationship with God and a clearer understanding of one's personal motives and goals."
(from Wikipedia) 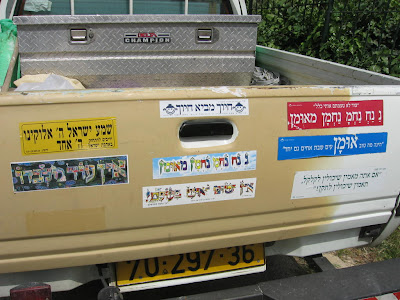 Wiki claims that "A few Breslovers also use a form of mantra meditation by repeating a word or phrase over and over. . . .
A small group of modern-day Breslovers use the Na Nach Nachma mantra, which is based on the Hebrew letters of Nachman's name.
This mantra was not used by Rebbe Nachman himself, but was taught in the 20th century by Rabbi Yisroel Ber Odesser.
However, this group is not part of mainstream Breslov, and is rejected by most adherents." 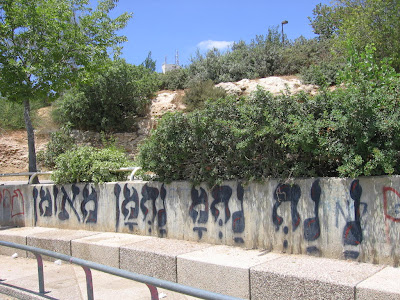 I think Wiki is underestimating.
Judging from the ubiquitous graffiti, printed signs, and Na Nach kipot all over the place, there must be MANY who believe in the power of the mantra. In Jerusalem, at least, and in Tsfat for sure.
One of the results of reciting and writing the mantra, so they say, will be the hastening of the coming of the messiah.
. 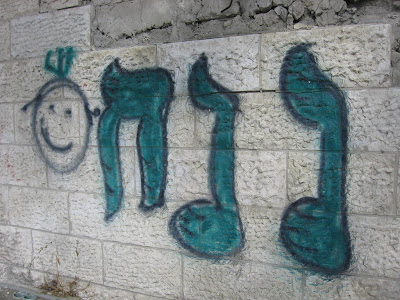 Every time you add one more syllable: Na, nach,, nachma, nachman me-uman.
.
Uman, in the Ukraine, is where Rebbe Nachman is buried. Every Rosh Hashanah tens of thousands of Breslovers make a pilgrimage to his grave.
If you want to know more about how this mantra was revealed in a mysterious "Letter from Heaven," please read here.
. 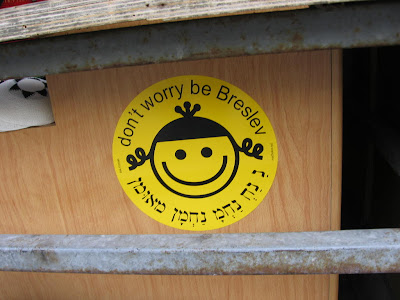 I have a friend who has studied the Hebrew language and alphabet very deeply. He believes strongly in the letters and certain words having deep and significant meanings. He has tried to explain it to me, but it is over my head.

I've decided to 'be Breslev' all day!

Yes, I certainly remember the Na-Na Nachman stuff, especially in Tsefat. When I saw your title, I thought maybe you were going to Uman. I know someone here who went with her husband to Uman, and she was one of about ten women among 10,000 men.

Thanks for explaining as much as you did. Lovely photos, too!

U are a never ending font of knowledge.

My kind of philosophy. I'd heard of Rabbi Nachman but how wonderful is that mantra. . .and the graffiti?! If it hastens the Messiah, even better. Such a nice visit I had at your blog today--thanks!

A wonderfully informative and interesting post. Thank you for sharing it.

A very informative and educational post for the letter U on ABC Wednesday.
Thank U!

Deep to deep for me. Babooshka said it all,U are .
Patsy

This information was incredibly interesting. Thanks for sharing.

that was so interesting..

this has been a really interesting post, well substantiated by the phots

Good Heavens! I can't believe how much you know and research.

such a neat place. thanks for the tour. that is why i like this meme coz we got to see your part of the world. great job.

This clapping, singing and dancing is something all religions ought to do more. We must enjoy life as God has given it to us. We therefore must give other people the chance to find life enjoyable, live in peace and respect together. Oh, how difficult to do so...

The Bal Shem Tov is my guy!
Thanks, Dina, for calling us home to the immediacy! It's a blessing to see the Hebrew letters too.
Thanks, Dear. It's a mitzva. Aloha-

Thank you do much for dropping my by blog over the last few weeks and giving me support while I was sick...
(Hug)
~Michele~