.
Yom Kippur has ended.
The long 26-hour fast has ended.  What makes it difficult is not the lack of food or even the lack of water, but with no coffee it is hard to feel fully awake. 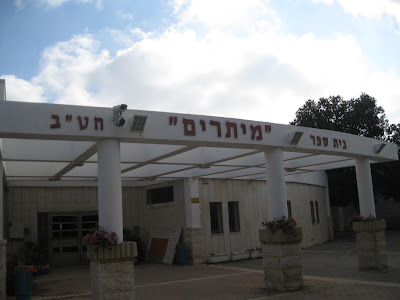 Special prayer services were held inside this school building which is only ten minutes walk from my house (a good thing since it was 37 degrees or 99 F outside, the hottest Yom Kippur in sixty years).
I went  there yesterday evening and today.
I have heard a lot about  Tzohar  but this Yom Kippur was my first experience with the organization.
From Arutz Sheva I learn that
"As part of its annual effort, the Tzohar organization will be organizing prayers at 250 locations around Israel for Yom Kippur, aimed specifically at secular Israelis who would most likely not attend services otherwise. Some 40,000 people are expected to participate altogether."

Here in Meitar there was a good turn-out, a mix of secular and religious men and women, young people, and even little kids.  (By religious I mean Orthodox Zionist Jews.)
The Tzohar machzor (Yom Kippur prayerbook) was provided.
It seems to be a mixture of Ashkenazi rite with some optional Sepharadi piyutim.
It has helps, like a tiny man printed in the margin who changes back and forth from sitting to standing.
The prayer leader even announces the page number from time to time (otherwise it is easy to get lost in the hundreds of pages).

What surprised me (dare I say, shocked me) was to hear two of the ancient prayers sung not to their traditional melody but to the tune of "Hatikva" (our national anthem) and of  "Erev shel Shoshanim."
Googling now, I see that it is a trend to adapt recent Israeli song tunes to the words of some prayers.    Neh neh . . .

Tzohar chairman  Rabbi David Stav has said that “Now more than ever we are seeing that Israeli society wishes to deepen its connection to Jewish identity, in a pleasant and non-coercive manner.”

Well, let's hope that today our prayers, no matter how they sounded, were heard in heaven and that we have been "written and sealed" in the book of life for the new year.
A new beginning!
.
Posted by Dina at 11:30 PM