Kawas ceremonial guards at the Ascension

.
On their calendar, today was the great Feast of the Ascension for Orthodox and Eastern Christians.
.
Jerusalem's Chapel of the Ascension was first built around 390.
It was destroyed and rebuilt by various conquerors many times.
A mosque and minaret were added next to the chapel in 1620 and the entire site remains in Muslim possession.
The main octagonal edicule surrounds the Ascension rock, said to bear the footprint of Jesus as he ascended, forty days after the resurrection.
It is on the Mount of Olives, in the Arab neighborhood A-Tur.
.
You can see photos of the 2012 celebration there in my posts about  Ascension along with links to information about the holiday and the place.
. 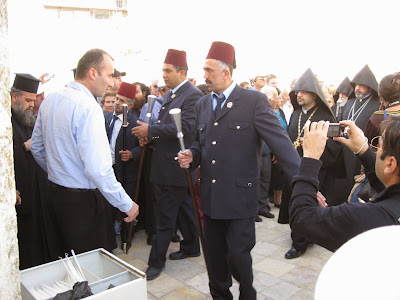 Today I want to show you only the Kawasim that were at that Ascension celebration.

Since Ottoman Turk times, these Arab ceremonial guards lead the way and clear the way for processions of Jerusalem's Christian clergy, with a rhythmic tapping of their staffs.
The Kawas is kind of like the Swiss Guard in the Vatican.
Some of them are Muslims and some are Christians.
. 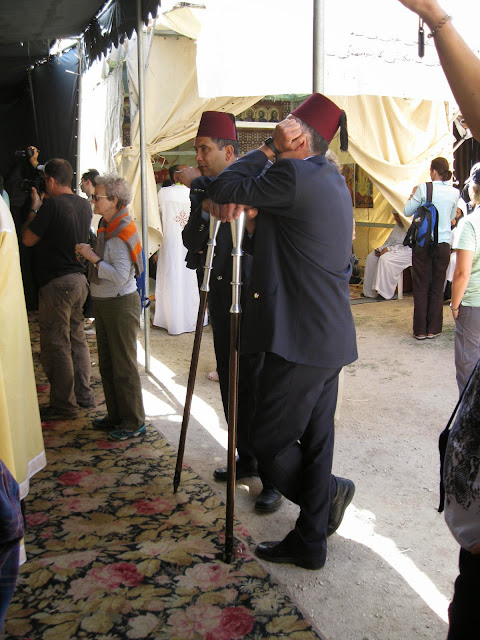 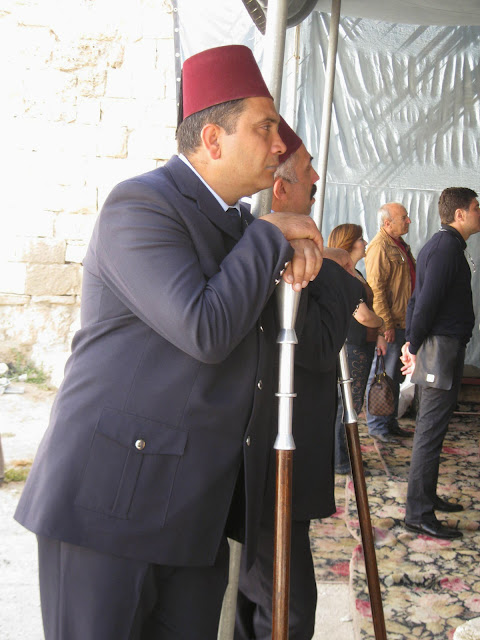 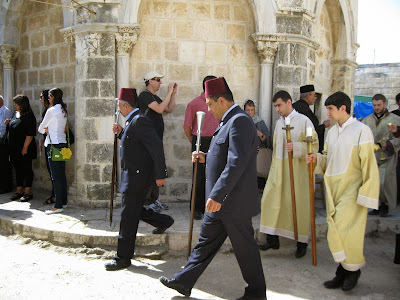 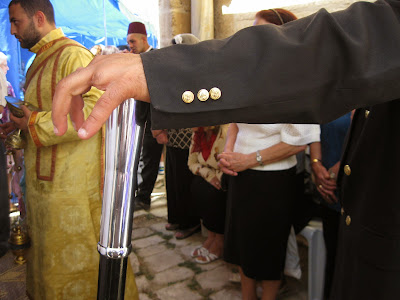 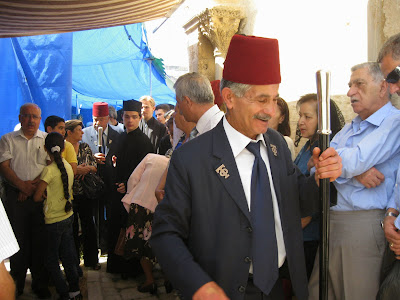 You can see more nice Kawasim in my posts  about a Papal Mass and in the Church of the Holy Sepulchre.
They are a wonderful part of Jerusalem.
UPDATE June 6, 2015: See and hear the Kawassim in action in the Patriarchate's new video!

UPDATE May 27: The [Orthodox] Jerusalem Patriarchate today published online their photos and videos of their Ascension Day on the Mt. of Olives, May 21.
.
Sr. Dr. Vassa has a new and very interesting brief video about making the transition from Ascension to Pentecost.  It is about what/why is Church.

Fascinating! I like the facial expression particularly in the last shot, but also the look of those staffs.

The fellow in the last photo looks really proud of what he is doing .
Alice

Always learning something new when I visit you, Dina.

A very interesting post and some really great shots!

Fascinating stuff. I never knew any of this before.

I see they are all wearing the Turkish type fez.

I found this quite fascinating, particularly the guards being both Christian and Muslim.

Wonderful post. It must have been so interesting to be there for the observance!

Dina, I blogged about these guys back in the day. I referred to them as the stick men. Silly me. Thanks for the information.