.
On my way home from Jerusalem last night, I was happy to see the new fountain all lit up.
And across the street, the 1926 Terra Santa College Building, after its recent renovation by the Franciscans, was also warmly illuminated. 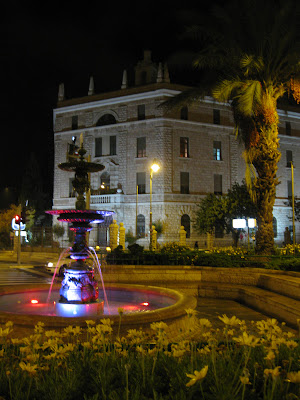 This small square is squished between many intersecting busy streets.
Because of its exposure to passing traffic it is often a venue for political demonstrations. 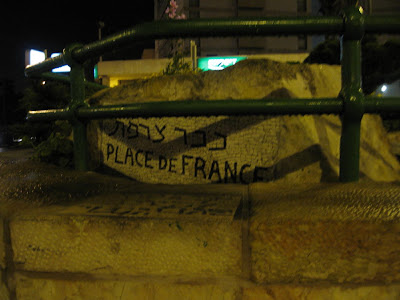 The rock says "Kikar Tsarfat" in Hebrew and "Place de France" in French, but it is also known as Paris Square. 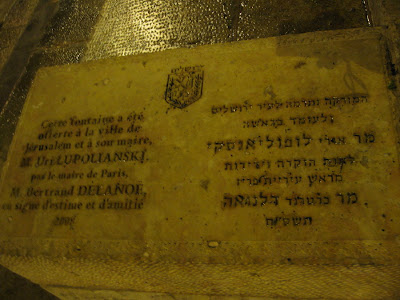 The story goes like this, quoting the fun guide book Jerusalem--Step by Step by Batya and Avigdor Kornboim:
"The mayor of Paris visited Jerusalem in 2006 and announced that he would donate an 82-foot (25 meters) model of the Eiffel Tower to be displayed at the site in honor of the 40th anniversary of the city's liberation. The city declined the phallic monument, and a replica of a famous fountain was promised instead." 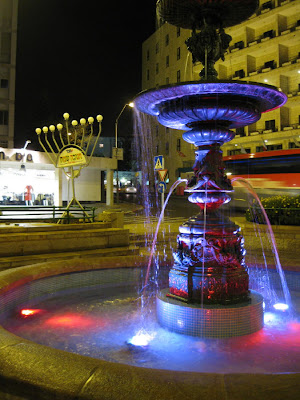 So on June 1, 2008 a more modest 13-foot (4 meters) was dedicated by Mayor Bertrand Delanoë, this time in honor of the 60th anniversary of the State of Israel.
.
But what I really wanted to show you is the temporary big Chanukah menorah put up in Paris Square by Chabad! (They have many all around the city.)

Chanukah comes early this year. On Friday afternoon the first of eight lights will be lit and the 8-day holiday will begin.
Then both Paris, "La Ville-Lumière," AND Jerusalem can be called the City of Lights.
.
Posted by Dina at 5:43 PM

Shalom Jabblog. Thanks, I will submit your names to the deciders.
Yes, Terra Santa is nice. Someday I'll try to get inside it.

Ciel, I hoped that title would attract your attention. :)
"Bougeoir" you call it?! That is so cool. Oh right, from bougie, candle!

Awesome post, Dina!
Thank you for dropping by. Everything's fine, just some problems I need to solve...

Today's post is a quotation from a Portuguese Writer, which could describe the new movie by Michael Moore I've recently watched, concerning Capitalism. have you watched it? It's almost unbelievable!

What fantastic night shots of the fountain! So illuminating and lovely.

Have a wonderful Hanukkah!

As far as names...I'm partial to Sarah (my daughter's name). But, I also like Rachel, Rayna, and Eliana.

Happy Chanukah, Dina. I must go find a Chanukah picture for Friday! Only two temples in Pasadena but I'm sure there will be festivities downtown.

Wonderful night shots, Dina.
I like the square with that so nicely illuminated fountain!

We do need a light at this time of year - it ought to have been a leading light...

Very peaceful images. There's something special about night time in places like this. At night they seem more sacred to me.

Very interesting! «Louis» thanks you for alerting him to this post - but he's equally pleased to read about your granddaughter!

«Louis et Mme la Vache» attended a Chinese Lutheran service last week where the Pastor explained the shades of meaning of 'shalom.' What a wonderful word Hebrew has given us - it is so much more than just 'peace.'

Hannukah is coming even to Honolulu!

This is beautiful Dina, they were building it when I was there and was unveiled in the springtime.