.
On the day after happy Christmas comes the sad story of Saint Stephen's Day.
Stephen was stoned to death in the year 34 or 35, probably just outside the Damascus Gate of the Old City of Jerusalem. 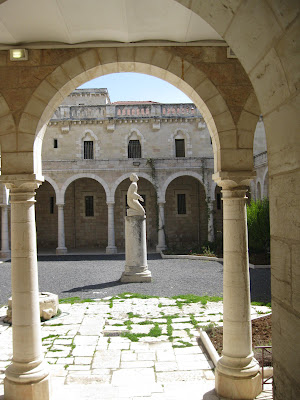 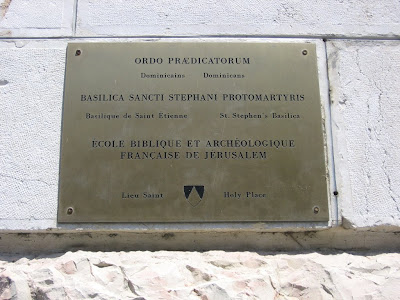 The Dominicans purchased the land in 1884, did excavations, and then built the new basilica of St. Stephen, Protomartyr.
In French its name is Saint Etienne. 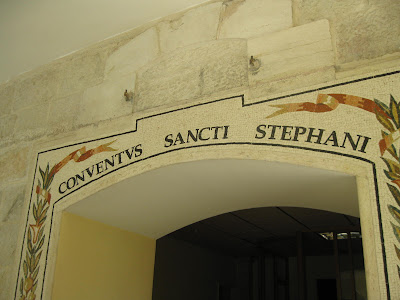 I read here that "The original church was built by the Empress Eudocia at the end of the fifth century to house the relics of St. Stephen, the first Christian martyr, and the adjoining monastery complex was so large that by the beginning of the sixth century it housed close to 10,000 monks."
.
Well, there are Dominican monks there at the Priory today, but not ten thousand! 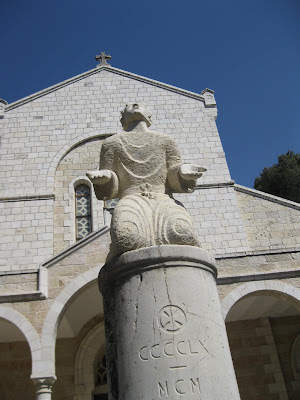 On an ancient column the freres inscribed the Roman numerals for 460, the year of the original Byzantine church over which the modern one was built and re-dedicated in 1900 (MCM). 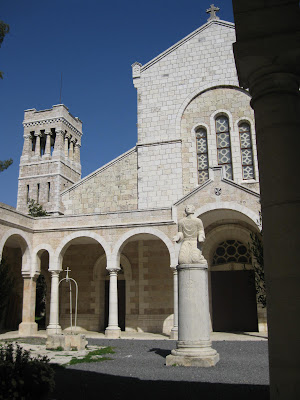 Also home to the famed Ecole Biblique et Archeologique Francaise, this is a beautiful and quiet place of prayer and of study.
.
(See an earlier post about their First Temple period burial complexes. )
.
UPDATE: I woke up this morning worrying. -- Surely there could not have been 10,000 monks living here, as in my quotation!
.
So further research revealed this:
"The walled monastic compound was the largest of all church structures in or around Jerusalem for over a century, larger even than the precincts of the Golgotha complex. Evagrius described the site as "a vast temenos [sacred enclosure], remarkable for its proportions and for its beauty." Cyril of Scythopolis referred to the compound as a "diocese" due to its size, and wrote that the grounds were large enough to house the 10,000 who gathered for a monastic revolt in 516 to protest the Emperor's opposition to the Council of Chalcedon."
.
This is from a remarkable project called
The Byzantine St. Stephen's Project, A Biocultural Reconstruction of Urban Monasticism.
.
Another source explains that "10,000 seems to be a literary exaggeration. Based on the archaeological record, the entire population of monks in the Judean desert was estimated to be 3,000. . . . Many medieval pilgrims, impressed by the numerous caverns in the Kidron cliffs, claimed that the number of monks in the past was 10,000. . . ."
.
Posted by Dina at 12:11 AM

wonderful. any chance of entering it?

Interesting and informative as usual Dina. Thank you!

A pretty spot to commemorate a sad day. Wikipedia has a nice gloss on Stephen if you google "Saint Stephen."

Dina: Thank you for posting about St. Stephen's Day. I learn so much from you and FA. You are so lucky to live in a place with so much religious history. You are in the epicenter.

We haven't had the TV on so I wasn't aware about the horrible incident with the Pope until reading your blog. "I heard it first on Jerusalem Hills Daily PHoto"!!!!

I never knew the story of the real St. Stephen before, but each time I hear his name I can't help but start singing the Grateful Dead tune of the same name :).

You know Dina, both first names exist in French. Etienne and Stephane. As for the city of Saint Etienne, (near Lyon), its citizen fellows are called "stephanois".

What a beautiful and interesting place, Dina! Wow! 10,000 monks? That's really something.

You did the post and found a great way to illustrate it! I hope you wouldn't mind if I link it to my post, yours is so much more exhaustive and interesting.

st stephen is also believed to be the first martyr for christ that was sanctified, in other words, the first saint

greek christian orthodox christmas is on 25th december - the russian (eastern) orthodox use a different calendar; their christmas is on 7th january
in fact, all festivals are celebrated with a 13 day difference between the two churches EXCEPT Easter, when the greek orthodox reverts to the use of the Julien (old) calendar instead of the Gregorian (new) calendar (used by the eastern orthodox), so that Easter is celebrated on the same day as the eastern orthodox church
the catholic and other western christian churches use the gregorian calendar solely to work out their feasts, the eastern orthodox se the julien solely - but the greek orthodox use both, which explains why, most of the time, the christian orthodox easter (both greek and russian) is celebrated on a different day from western christian chrches

Med. Kiwi --Thanks Maria. What would I do without you. I will try to learn and remember your good explanation.

I never thought about Stephanos as also being the first saint. Good point!

Gigi, sure, if you call ahead and ask to visit. Or maybe just show up and talk to the gatekeeper. Not sure. I was there once with a guided group on a tour of monasteries, and once I just walked in to attend a seminar day on the Dead Sea scrolls (plus a burial of ashes [that is the previous post's link]).

Petrea, yes, and you would love the antiquities there. Thanks, I went to read the Wiki.

Jen, lucky indeed. Jerusalem is the center of the world. Your "epicenter" sounds a bit ominous. Sometimes it is that, too.

Robin, and here *I* was humming from the carol, "Good King Wenceslas went out, on the Feast of Stephen." For you it is a Grateful Dead song?? I had to go to YouTube to hear and read it. Must be one of the many things I missed out on by leaving America in 1968.
Or is it just different generations? Thanks for filling my "chor bahaskala."

Kay and Catherine, I was already worrying about that and then your comments pushed my worry over the edge and I researched and added the Update clarification.

Vogon Poet, your lovely statue of the saint and FA's post were my inspiration to post about St. Stephen.

Very interesting information, Dina. We (protestants) don't celebrate St. Stephan's Day, but of course we know the sad story where Saul(later Paul) attended the stoning of Stephan and was at the time convinced that the execution was a righful thing to do. Paul became the apostle of the gentiles lateron, when he was converted to Christianity. But you know this story too, of course.

Dina, it looks so peaceful. I especially like the first one. Cloisters are magical to me, even though I do not believe.

A sad occasion but an extremely beautiful church and surroundings. It looked well maintained and like living history.

A beautiful place and interesting facts your give us as well.

I saw where you mentioned olive wood on Leif's blog.
I have a small bible my father brought home from WWII from your city. THe cover is olive wood. It's lovely.
V

What a beautiful place.

I love the photos that you take of all the cool places in Jerusalem and it's history. Every place must tell a thousand stories.

History often seems intertwined with myth...but that makes it no less fascinating. I appreciate your post about St. Stephen's basilica and am trying to remember if I ever visited in person...

Hey Wil, I wouldn't have as much to blog about if I went only by the Protestant calendar. ;)

Ciel, cloisters are indeed "magical" places. Places much prayed in have their own special holiness, left there in the stones by generations of praying people and pilgrims.

Rune, yes, it is alive and well.
No, no snow. Tomorrow I will be in Tel Aviv in 25 degree C weather.

Virginia, Oh, I remember seeing olive wood covered Psalm book a long time ago. What did your father do here in WW2? Sounds interesting ...

Gallow, right! The wise saying: "Let Jerusalem teach you." And we speak of "the dialogue of the stones."

Sara, good point. I agree!
St. Stephen's is on Nablus Road, in east Jerusalem (the Arab part), past the Garden Tomb.
It is off the tourist route.

Leif, send me a ticket and I'll bring you a whole olive trunk. :)
Meanwhile I just emailed you some tree trunks.

Another "wow" post, Dina. You seem to bring to life my faith and tradition. What a blessing to live in the Holy Land. God willing, I will visit there someday.

What beautiful photos! You've presented us with another wonderful blog, filled with history and times past.

I enjoy very much this interesting post, Dina. What a beautiful place!