.
Thank you all for your comments and questions on yesterday's post. They are of great interest to me.
Today let's continue the subject and look at some of the things which caught my eye as I roamed the ancient Jewish cemetery of Tiberias. 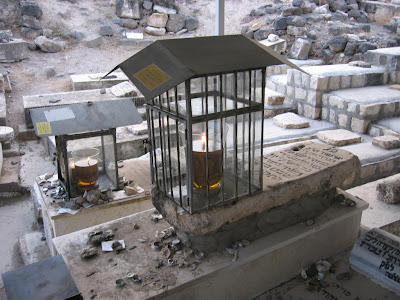 My first time to see such memorial flames.
The oil + water probably can burn for a long time. 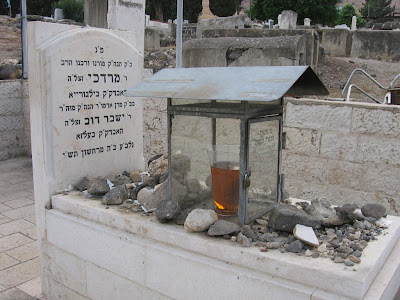 As a sign of respect, visitors put a stone on the tomb.
Also, mourners place a pebble on the earth that has been shoveled into the grave as they depart from a funeral. 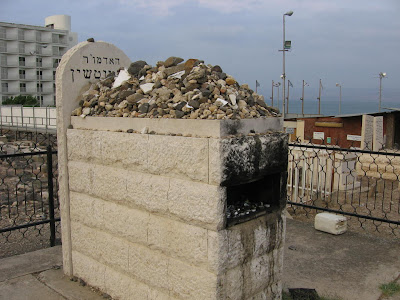 This admor (great rabbi) must have LOTS of people who come to pay their respects.
If you click to enlarge the picture, you see little notes among the piled stones.
The black is from the many little tea lights lit in his memory. 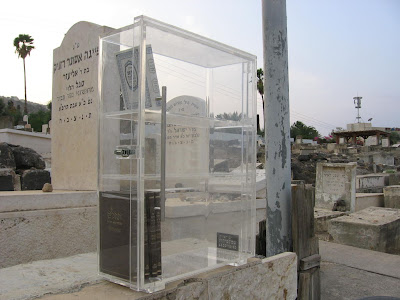 Prayerbooks are available in a rain-proof book case. 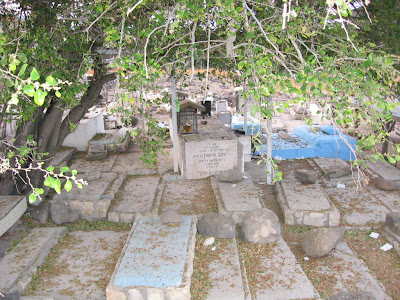 A (very) few of the older graves had been given a coat of blue paint.
I assume this is the old Middle Eastern superstition that this shade of blue drives away "the evil eye." 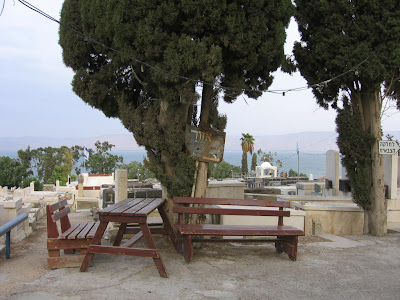 In the huge cemetery this was the only place I saw with anything to sit on. 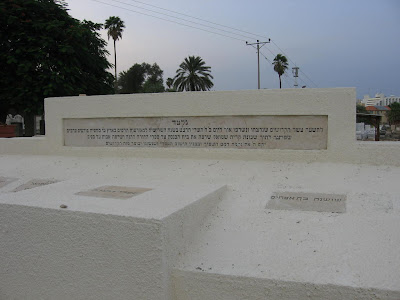 These names are not on graves but rather on a gal'ed, a memorial.
It speaks of the 19 "martyrs," largely women and children, who were stabbed and burned to death, some in the synagogue and some in their homes, when "raiding gangs of Arab rioters" infiltrated the Tiberias neighborhood of Kiryat Shmuel on October 2, 1938.
The 1936-1939 Arab revolt was a hard time for the Jewish residents of Palestine, then under the British Mandate; but the Tiberias massacre was especially shocking. 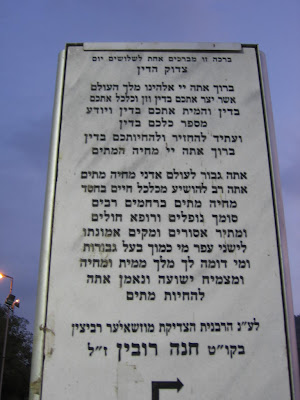 The words of the prayer are large and clear so that a group of mourners who has just buried their dead relative can recite it in public, together.
However difficult it is to understand why your loved one was taken away, the prayer Tziduk HaDin must be said, as a statement of our faith and trust in God's justice.
It speaks of God giving life to the dead.
.
Judaism does not have dogmas, especially not about future things that we have no way of knowing for sure.
Some believe in resurrection and some do not. 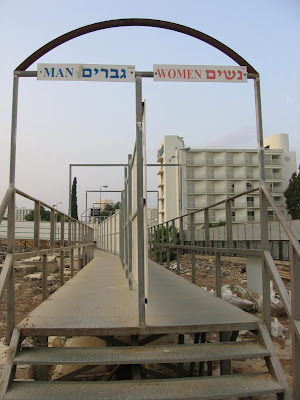 This raised walkway over the graves must have been built recently to protect the sensibilities of the ultra-Orthodox. It separates the hundreds of mourners leaving the cemetery after a funeral into MAN [sic] and WOMEN. 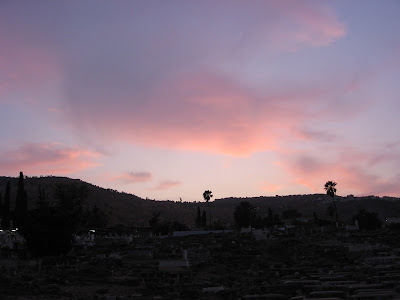 After finishing our archaeology work in early afternoon (the dig was just south of the cemetery), I would often stop in the cemetery to roam about, all alone.
When the sun dropped behind the mountain, darkness fell quickly, reminding me it was time to return to the land of the living.
.
Posted by Dina at 4:20 PM