.
For T day on ABC Wednesday we travel north to Tiberias to visit tombs, some over two thousand years old.


(Touch your mouse button to enlarge any photo.) 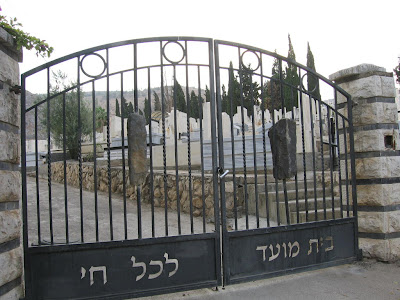 The gate to the ancient cemetery.
(Everywhere in Tiberias you see ancient local basalt stones "impaled" on iron fences for decoration. Always reminded me of shwarma meat roasting on a turning spit.) 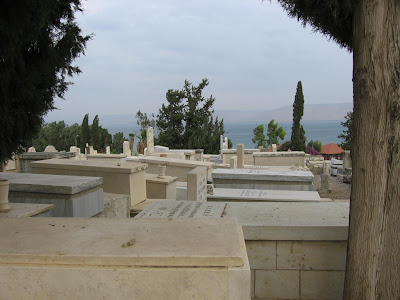 Just across the road is the shore of the Sea of Galilee. 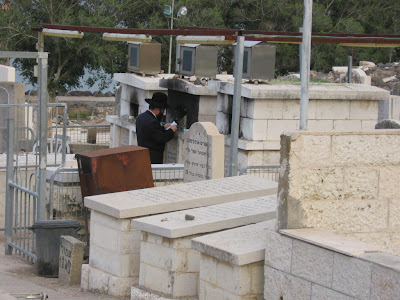 This man was the only other person I ever saw during my wanderings in the huge cemetery.
He was praying at the tomb of an important Admor (the word comes from the Hebrew Adoneinu, Moreinu, Rabbeinu, meaning our master, our teacher, our rabbi).
Many of the revered old rabbis are buried here.

Tiberias is one of Israel's four "holy cities." The Chabad website explains it thus:
"Throughout the 18th and 19th centuries Tiberias received an influx of rabbis who established the city as a center for Jewish learning.  One of these was Rabbi Menachem Mendel of Vitbesk, one of the leaders of the third generation of the Chassidic movement, who, in 1765, emigrated from Eastern Europe together with a group of several hundred followers. During this time, because of its concentration of Jewish scholars and mystics, Tiberias became known as one of the four 'Holy Cities,' along with Jerusalem, Hebron, and Safed." 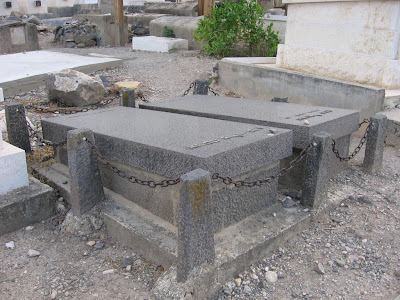 This was a rare instance of a modern-style use of basalt. 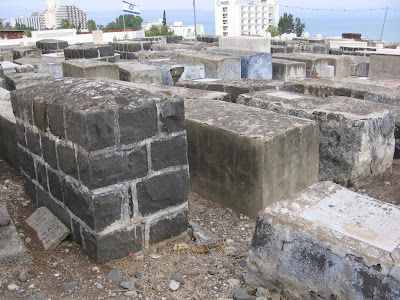 Most of the tombstones are so old their inscriptions cannot be read or are missing. 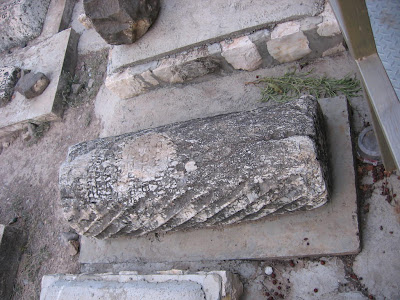 This design was unique. 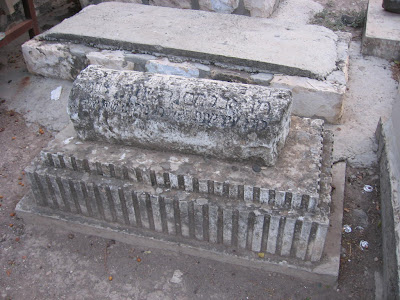 This one is very unusual. 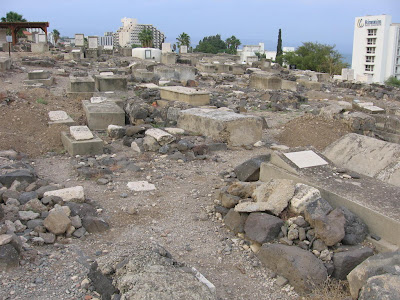 Ever since Herod Antipas, son of Herod the Great, built Tiberias some two thousand years ago, it has been shaken by battles, earthquakes, and a great flood.
Plus, I imagine many good stones were robbed from the graves by unfriendly "neighbors" or conquerors for reuse in building their own houses. 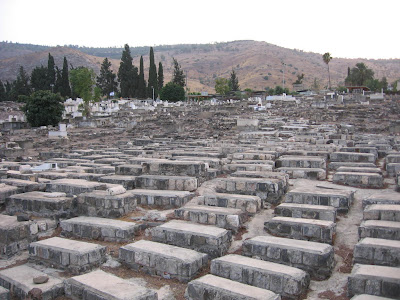 According to the sign, 350 graves have been repaired in the section where the disciples of the Baal Shem Tov are buried.
The work was done by the Committee to Save the Tombs of the Ancient Ones. 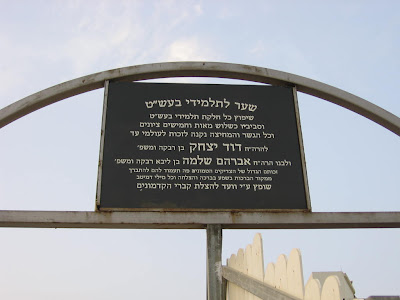 The sign invokes God's blessings on the family of the benefactor "by the great merit of the righteous ones buried here."

Come back tomorrow and I'll show you  the divided (male-female) walkway that he had constructed for people to exit the cemetery after a funeral and some other things that were new (and strange) to me in this special place in old Tiberias.
.
UPDATE: Sorry, I forgot not everyone is familiar with Jewish burial.
A grave is dug, the shroud-wrapped body in put IN THE EARTH and is covered with earth.
Dust to dust, ashes to ashes.
OVER that goes the marker or tombstone or raised structure.
In Israel a coffin is used only for military and state funerals, not for the rest of us.
.
(Linking to inSPIREd Sunday.)
.
Posted by Dina at 4:26 PM