Another forest fire, the Jerusalem Forest 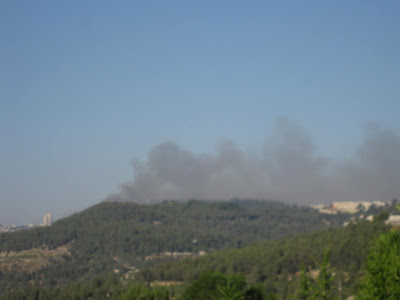 The Jerusalem Forest was burning all afternoon.
Mostly old pines planted by the Jewish National Fund/Keren Kayemet back in the 1950s.
Those who wanted to quickly "redeem the land" in the young state back then surely did not realize that pine trees are the most combustible and dangerous trees.

From my house I could see the smoke rising; the flames were down in the wadi.
At least four little planes buzzed over my house, going back and forth with water and maybe also flame retardant, until the darkness stopped them.
.
They say the fire is just about under control now, tonight. Thank God.
.

Enlarge the photo to get the lay of the land.
The Har Nof neighborhood is on the left. Its residents were told to stay home and close their windows.
Smoke inhalation sent several to the hospital.
Behind the green mountain is Mt. Herzl, the mount of remembrance.
Yad Vashem, our Holocaust memorial center, came dangerously close to going up in smoke.
Imagine if the archives and artifacts from the Shoah had burned . . . how awful that would have been.
But while Yad Vashem was being evacuated, the director sent his men out with hoses even before the fire engines could get there. He stood firm and would not be moved.
.
Our thanks to the brave pilots, fire-fighters and volunteers who saved the day.
.
Information in Haaretz is here.
.
Posted by Dina at 9:54 PM