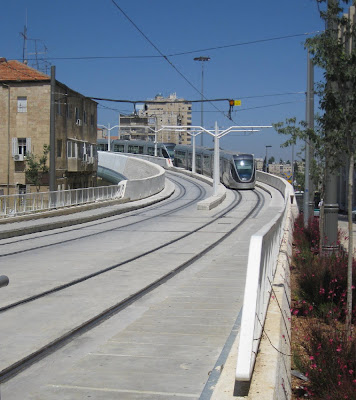 There goes the tram, up and over the curved Calatrava Bridge of Strings!

In a post of mine from three years ago showing the early stages of the bridge construction an engineering maven said, "The Bridge of Strings will be the first train-carrying curved suspension bridge in the world." 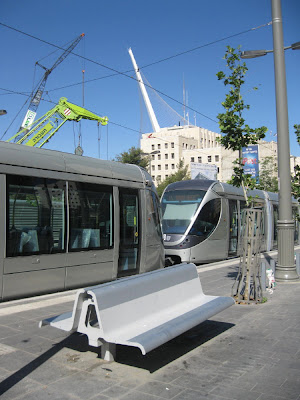 You can see the white mast and the cables of the bridge protruding from behind a tall building.
(Lots more pictures of the whole bridge are under my label "Calatrava.")
.
And look! A brand new bench for future tram passengers.
This tram stop is across the street from the Central Bus Station on Jaffa Street.
.
We the public were told the light rail would start taking passengers in August, but now that has been delayed again to November.
The reasons, which include a lot of infighting, are explained in the Jerusalem Post.
.
Well, at least now we have benches to sit on and watch the empty trams glide by as they are being tested.
It's more like our PATIENCE that is being tested.
.
Posted by Dina at 9:05 AM