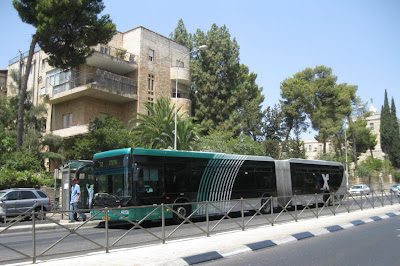 Egged's sleek new urban buses are so long that some folks call them train-buses.
You see a few of them on certain routes in Jerusalem.
They are even longer than the regular articulated "accordion" buses.
.
"Egged aspires to be a pioneer in the reduction of air pollution by purchasing buses equipped with Euro 3 engines, using ultra-low sulfur fuel," their website says.
.
But oi, what's this? While searching for information I happened to find an article in today's Jerusalem Post saying that "The Environmental Protection Ministry submitted an indictment in the Petah Tikva Magistrate's Court against the Egged bus company for air pollution last week . . ."
.
Apparently there are big differences between the Euro 3, 4, and 5 emissions standards; and the environment ministry claims that Egged went and bought 168 buses which are not of the most up to date standard.
.
Oi.
Oh well, I still think they are pretty.
.
Posted by Dina at 8:52 PM