Jerusalem's new mayor will be Nir Barkat. He received 51% of yesterday's votes. Rabbi Meir Porush got 42% of the ballots. The secular candidate was victorious over the ultra-Orthodox one. 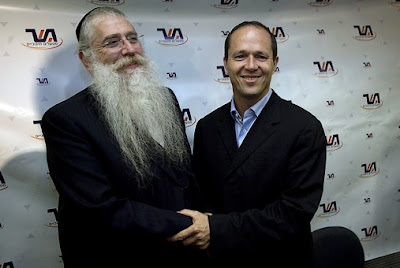 AP photo from today's Jerusalem Post
Only about 35% of registered voters bothered to vote. The national average for the municipal elections across the country was 40%.
Jerusalem's population of 750,000 is divided into roughly one third to one half haredim (ultra-Orthodox Jews), one third not-as-religious Jews and seculars, and one third Palestinians.
The Palestinians are mostly Muslims living in East Jerusalem, the neighborhoods annexed by Israel following the 1967 Six Day War, the areas they want as the capital of a future state.
Only a brave 2% of East Jerusalem Arabs voted.
Most heeded warnings from Palestinian leaders in Ramallah who said that voting in municipal elections is tantamount to recognizing Israel's "illegal" claim on East Jerusalem.
Although the Palestinian Authority has previously urged Jerusalem Arabs to boycott the municipal election, this is the first time the PA's chief Islamic judge, Sheikh Tayseer Tamimi, has issued a fatwa banning Arab residents from voting.
So you see it is complicated. Nothing in Jerusalem or Israel or the Middle East is simple or easy.
Let's hope Mayor Barkat will make it better for all of us.
Posted by Dina at 5:18 PM

Thanks Dina. The winner should be the people of Jerusalem, both Israelis and Palestinians.

A question - Can a muslim Palestinian sign up for being a candidate in this election?

During thousands of years of history of Jerusalem, the city and people were protected under different groups rule: Jews, Romans, Persians, Arabs, Turks. That makes it complicated now.
But according to Jewish tradition the city was first founded by Shem and Eber, ancestors of Abraham. So it means this holy land belongs to all of the Abraham's sons originally and we all are his sons and daughters.
I think today's Israeli-Palestinian conflict goes back to the British Mandate of Palestine when In 1947, the U.N. approved the partition of the British Mandate of Palestine into two states: one Jewish and one Arab, which I think it was a wrong decision.

Meead, the answer to your question is yes. But like I said, there is a fatwa out for any East Jerusalem Arab who comes just to vote, so actually running for office would be even worse for him or her in the eyes of the Palestinian Authority. They would see it as collaborating with the Israelis.

But in fact the mukhtar of Sur Bahir was a candidate for mayor of Jerusalem a few months ago, until he dropped out. There is a good article about it:
http://www.jpost.com/servlet/Satellite?cid=1222017621122&pagename=JPost%2FJPArticle%2FShowFull

I wish some East Jerusalem Arabs would be elected to City Council and be able to fight for their rights from inside.

Regarding the history you mention:
Fortunately for the Jews but unfortunately for the Arabs, the Arabs did not accept the U.N.'s Partition Plan in 1947. So instead of a state, they got what they call the Nakba (=catastrophe) during our War of Independence.

Your idea about Abraham and the Abrahamic faiths and Jerusalem is interesting. I think this idea about Shem and Eber is based on a midrash. But I have to go now and read more about it.

Bonsoir Webradio. You are right. In fact it is shameful, such a low turnout for voting.

I guess politics are always complicated. I pray that soon our elected leaders will be able to make changes for the better.
*hugs*

If only the Palestinians used the system to better themselves, instead of fighting it. Look at what African Americans just acheived by using the system to their advantage!

51% of 35% of voters! it isn't a resounding success.
Hope he 'll be a good mayor.
We'll become Middle East specialists thanks to you Dina. You're the perfect journalist to promote your city. Always unbiased, it's a great quality.

I pray for the peace of Jerusalem as a Christian.
Patsy

Complicated. Yes indeed. Complicated is the best word I know to describe Israel. Thanks so much for the information you give in your posts.

It's very complicated, and I hope the fact that the new mayor is "secular" bodes well. It's my opinion that the separation of religion and government (church and state) is a good thing. Not an easy thing to do in the Middle East, I know! And it always creeps into American politics, too.

I used to know some East Jerusalem Arabs...but lost touch with them years ago. I wonder if they are still around? On my first trip to Israel (1974) I was invited to their home for a meal...they were wonderful hosts and so friendly and interesting. It is sad when politics and complicated situations get in the way isn't it.

let's hope a secular win is better than an ultra-religious win
you have an incredibly low turnout for elections, dont people feel passionately for who rules them?!?

Significant post, Dina. How it's right your last line: yes, we hope that with these elections it will be better for all of you.