Like the badge says, you're invited to go visit the newest meme on the planet. Just click on it and you will be taken to other photo bloggers' worlds.

.
We posted yesterday about the fight that broke out at the Church of the Holy Sepulchre in Jerusalem's Old City. Fortunately none of the police or the agitated Armenian and Greek Orthodox monks and priests was hurt bad. 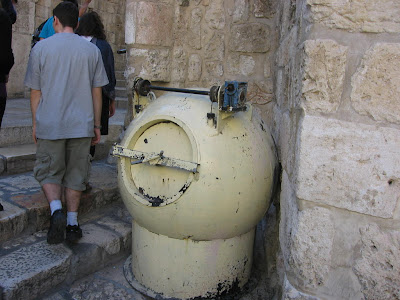 And fortunately the violence did not reach the stage of necessitating use of this ugly thing that sits in the courtyard of the church. It is meant for bomb disposal if, God forbid, one should be found. 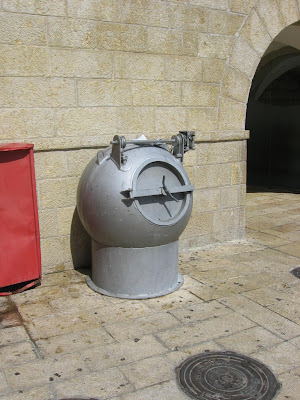 Here is another one at the Western Wall Plaza.
Yep, that too is my world. The threat of terrorism is part of everyone's life in Israel. 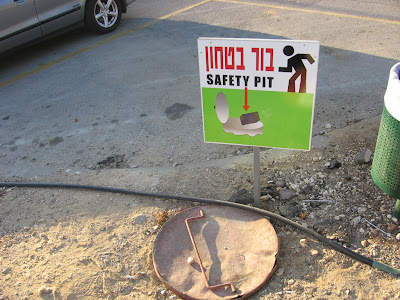 More common than the big metal containers are these "safety pits" which are prevalent in public places. The Hebrew sign says bor bitachon, literally, a "security hole."
A suspicious object, an abandoned bag or whatever, could be put there, at least until the bomb disposal unit arrived.
I always wondered how the lid would stay on if a bomb exploded inside. Well, a few weeks after this picture was taken at Hadassah Hospital, the security guards had put four sandbags around it. And today I noticed they were all split open. Oh well, someday we may find the perfect method.
Does your city have anything similar? Or is this just an Israeli thing?
.
Posted by Dina at 8:43 PM

We don't have anything like this in Seattle, Washington, so we are blessed. It is such a sad commentary on our world today. Thank you for the moving photos!

I'm not sure any American city would have anything like this. But we need to be aware of how good we have it. I think often people do not realize what people in other countries live with every day.

I sometimes wonder what it'd be like to live in a place terrorists frequent. It never occurred to me -- but it makes sense -- that there would be places to put suspicious objects...just in case. Thanks for this post, Dina.

I don't think we have anything like that in NC (USA) where I live but security is certainly tighter than it used to be in terms of what people can take into some buildings. I haven't encountered it much personally. It must be hard to deal with these issues regularly.

That definitely is an Israeli thing!
I hope you can get rid of them ASAP!
Cheers, Klaus

So misbehaving people gets to be thrown out of that safety pit too?

It is unfortunately an unpleasant Israeli problem. I hope one day all peoples will live peacefully side by side.
To see priests and monks flaring up in a fight one wonders how much of the christian teaching of turning the other cheek they have taken to heart.
If belting each other over the head has gone that far, what hope is there for the rest of the world?

As always your recent posts have been fascinating. Proving to myself what a sheltered life I lead. Thank you so much for the light you shed on other lives in other parts of the world. And you have my prayers that those holes won't ever have to be used.
*hugs*

I believe in the US the containment device comes with the police when called.
I would never have imagined something like this without seeing your post.
Like Louise said, here in the US we really don't realize.
Have a blessful day.

You live in a real dangerous world. Somehow you seem to have accepted that. Thanks for your comforting words on my blog. God bless you!

This Is My Blog - fishing guy said...

Dina: Definitely have never seen these on the streets but the police do have them for bomb disposal. I pray that you stay safe.

We don't have anything like that yet, but not long ago, a mysterious box was spotted under a bridge or trestle north of Little Lake Valley, and a bomb squad had to destroy it. It turns out it was a geo-cacher's poorly placed treasure trove.

This really highlights what your world is all about and how you just get on with the everyday living. It really is so juxtaposed one of the most spiritual places on earth living under the threat of such violence. Fascinating.

Great post! I did a little snoop around your blog and I loved it. I'll be back. Joann

It's not just Israeli, but certainly is concentrated in trouble lands and among troubled peoples. I think of Crete, and Northern Ireland, and ... I wish there were not so many. I wish we could live together in peace, or at least keep the innocent bystanders out of it.

From where I live, I don't think we have things like this. Just like Louise said, we need to be aware of how good on things that we have..

Posted mine, HERE. Have a great day! And thanks for the virtual travel;)

The Good Life in Virginia said...

i think that these are definitely something that is specific to your part of the world at this time.

your post is very interesting in what can/could happen to any part of the world.

yes, we sometimes do not realize how good we have it.

thank you for sharing with us.

Thank you so for sharing this view of your world. It's very sobering to see what people in other countries live with every day. As you can gather it's not something we who live in the US are familiar with thankfully.

We are very fortunate here not to have such as that. Thanks for showing me that part of your world. Sometimes we need a reminder of just how blessed we are.

Wow that was a serious reality check for me here in the USA! How sad that something like this is necessary in your world

Whoa, Dina! This is the other side to life in the beautiful, fascinating city of Jerusalem -- a side that we forget people like you must face on a daily basis. I really can't imagine what it must be like.

Here in my city there is one fear that comes up once in a while, and that is the fact that our nuclear reactor was built on an earthquake fault -- what were they thinking!

It's one of those things you sort of forget about, and then the government sends out a mailing telling us what to do in the event of a nuclear accident, and we remember all over again!

But our thoughts and prayers are with you there...a much more scary situation.

Eric recently posted at Paris Daily Photo about the transparent trash receptacles in Paris - so a bomb could be easily seen. I seem to remember there were no trash cans in the London tube so no one could hide a bomb, but others here could probably be more accurate about that.

In Pasadena, there's no terrorist threat that I know of.

President-elect Obama has begun to receive security briefings from the FBI and Homeland Security. He's learning the Top Secret stuff that he's going to have to deal with. There's probably a lot we don't know.

didnt know there's a place where there's a designated container for bombs. this is a bit odd for me. but i think it's a necessity in the middle east.

No, in Italy we don't have anything like this. Very interesting information, Dina.

that's pretty spooky - it's one of the elements of daily jerusalem life that i wont be telling my hubby about so that we can plan to come to your city one day!
we are actually thinking about planning it, but i don't know quite when it will be able to take place!

I'm so sorry you need to have this, Dina. It is such a worry.

There's something very tragic about one of the holiest places in the world (for all world religions) needing a bomb disposal.

I saw the fight on TV and couldn't believe it !

This is very interesting post.Thanks for sharing.

I have never seen anything like this. Thanks for the look into your world.

Have never seen anything like it and I hope we never need anything like that too.
Happy veterans day and I thank God for Freedom.

I saw it on TV but I guess you have seen more. Is this the future for all of us?

Yes , you live in a very special area. Thanks for sharing this with us (and that's not only on tuesday)

no, london has nothing like this,but it is essential to have there. thanks for showing us.

Not in Paris. But we get armed soldiers in Public places, like train stations, airports, subway, Euro Disney.....Certainly other agents dressed as every body to survey.
Our public trash cans are made of transparent plastic bags since a terrorit attack some years ago in the subway. To prevent from hiding a bomb.
I have dear friends of mine who went in Israel for a tour. What surprised them was the soldiers they met everywhere. And they were here, 20 years ago!

We don't have a bomb disposal pit/big container like in your city. Once we had a bomb scare at Petronas Twin Tower. But that's all I could recall.

I am really keen to learn about life in Israel and I am glad that I get to know them through your blog.

Unfortunately for Malaysians, we are banned from travelling to Israel. However, the ban makes me more curious and inquisitive about Jews,its history and traditions. So I read books, watched tv series (incl Sex & the City), movies and documentaries or even visit Jews settlements in Paris & Prague, and the Dachau Concentration Camp in Munich when I was visiting Western Europe last year. I am truly amazed with the history, culture, people & traditions of the Jews.