.
A lucky day! Just in time for my "Rails in Roads" post for ABC Wednesday "R" day a strange machine materialized, one I'd never seen before.
It is part of the on- (and on- and on-) -going Light Rail project this blog has been showing lately (e.g. yesterday), which Jerusalem's disapproving new mayor calls "the Blight Rail." 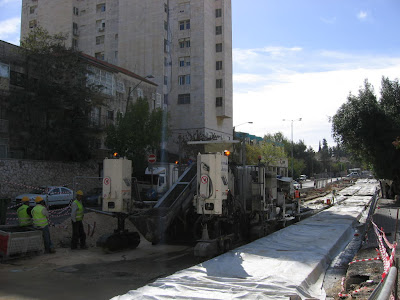 From what I could Google, I think the long machine is a slipform paver. 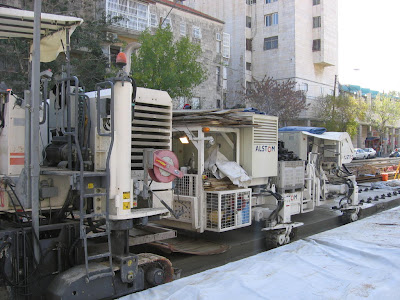 It advances on crawler tracks. Unfortunately, nothing was moving when I was watching. The workmen were sitting, watching the crazy woman taking pictures of a machine. 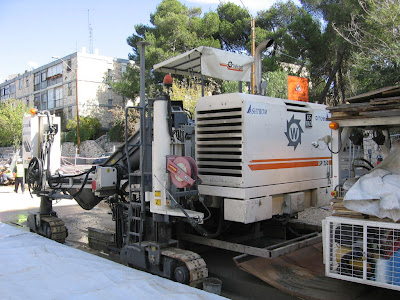 It goes in the direction of the wet concrete (to the left here). 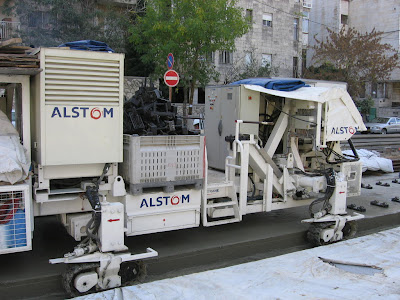 A bunch of those black metal thingies ("rail fixings" maybe?) were piled in the crate. So I assume that with computer technology they are placed directly in the wet concrete slab, hopefully at just the right spot. 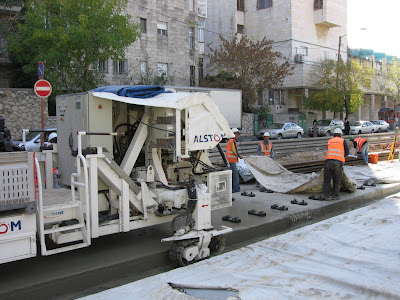 The concrete must dry for 3-4 weeks.
Jerusalem is having unseasonable warm (low 20s C) and dry weather.
Is that why they cover the fresh concrete, so it won't dry too fast? 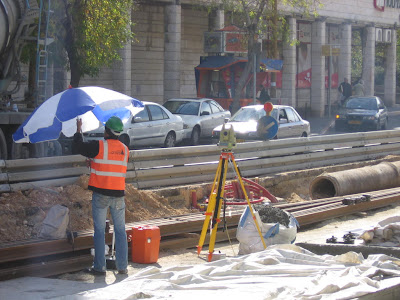 Opening a beach umbrella in the middle of Herzl Boulevard?! 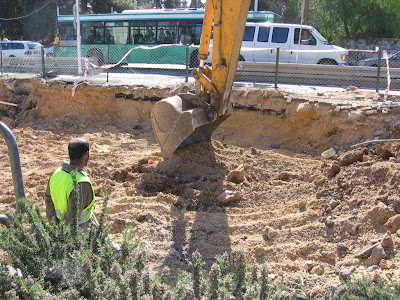 Just a block to the west of the slipform paving machine, this is how it looked in April. 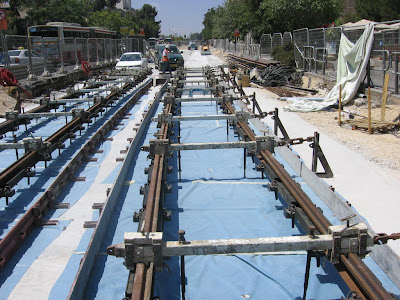 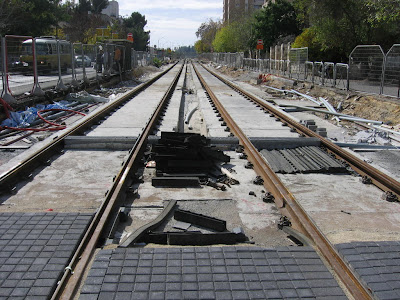 And the rails as of today.
They stretch all the way west to Mount Herzl, the starting point of the Light Rail, where we have the red Calder stabile, the beginnings of a train station, and the new underground parking for future tram commuters.
The Light Rail will zip across spread-out Jerusalem, up to her eastern suburbs, God (and Hiz Honor the Mayor) willing.
.

Maybe when they get the light rail system finished I will come ride it. I can always dream. :)

Judging from the mural it will be worth it when it's finished!

That's political matters, Dina! Don't even try to understand why one builds a project that the followings try their best to ruin. There's no explanation for that! Politics don't try to work for our best, they work for their own popularity. At the evidence, our best and their popularity aren't compatible.

This Light Rail seems a idea. We get something similar in Paris.
Like this man with the umbrella, so unusual vision!

Alsthom is a french compagny...

Once it's all done, I'm sure everyone will be happy they went through all the upset. It'll make travel much easier. I'm assuming the coaches will be air-conditioned. *heh*

You're standing in exactly the same place in the last two pictures! How serendipitous! I never seem to be able to find the exact spot, so tho two photos are close, never as close as yours.

What a neat R post! Perfection I'd say! Do hope that rail is done and the mayor decides he like it!

"A bunch of those black metal thingys"
Why is it that this woman absolutely understands exactly what you were trying to tell us?

drive carefully, we can wait? - hilarious!
a love railways - the best way to travel in my opinion

I saw this when we in Nice France. isruption but the reuslts were well worth it. I hope yours are too.