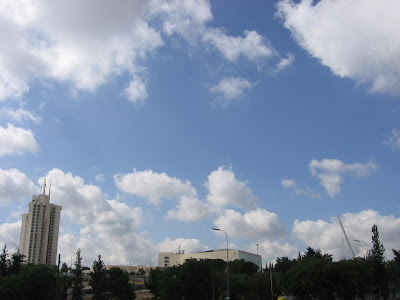 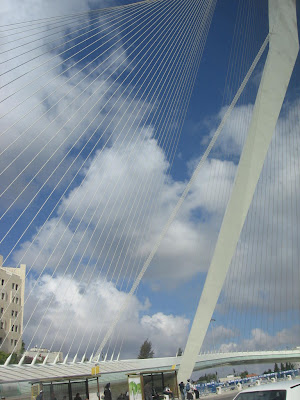 Clouds have found their way back to Israel! We even had thunder and lightning and hail yesterday, for all of three minutes. Counting some rain in the night, Jerusalem got but two millimeters.

With big fanfare the Calatrava bridge was dedicated in June. (Click on the bridge label below to see the party.) It is meant to carry the tram or light rail into downtown Jerusalem, but the train tracks are still not completed.
Can you believe this?!? Nir Barkat, elected mayor just a few days ago, might take the bridge down! Ha'aretz tells it this way:
Barkat lambasted the Jerusalem Light Rail project and the Chords Bridge on which the light train would enter Jerusalem. He said he would reexamine both projects' feasibility and not hesitate to replace them with cheaper, more effective alternatives, if such were found.
"Israel's poorest city should invest the money in education, culture and sanitation, not in bridges," Barkat said. Criticizing the NIS 280 million investment in an ostentatious bridge when so many people want to leave the city, Barkat said: "I don't know anyone who would stay in Jerusalem just for a bridge."
Our roads have been dug up and reduced to a narrow passage for years already as the train tracks and this bridge were (and are and will be) being built. And now the incoming mayor is going to undo everything??
.
SkyWatch is under way for hundreds of bloggers around the globe.
Pay them a visit or consider contributing a post yourself. Nice people and nice skies.
Posted by Dina at 6:00 PM

Dina, I posted a photo which I took it during my stay in Seattle. It's about Gaza, Israel, US, Iran and freedom of speech. It may be interesting for you. :) Dina could you please let us know more about Gaza? Have you ever been there?

Keep us posted on the latest Jerusalem sagas...

I am a fairly new blogger, but i was very fortunate to find your blog. I really enjoy having a bit of insight into your world. I think you deserve an award.

Very interesting reading about your recent elections and the bridge. The world is certainly a complicated place with trouble everywhere.

Beautiful pictures. But you are right about the absurdity. I don't care how much it cost, it is THERE. Isn't it cheaper to leave it there than tear it down?

Great photos, Dina. How strange that your new guy would want to take it all down. How is that truly cost effective?

Oh Dina, I forgot to tell you that as a transportation engineer who also knows a little about urban planning, this bridge may bring more people and money to this city. You'd better invest on the both parts: infrastructures and education.
Some parts of Iran are good examples of not having enough urban infrastructures but with highly educated people. This condition encourages them to immigrate to other places since they demand a better place to live.

Meead, thanks for your transportation engineering ideas. Can you write that to the new mayor? He is on Facebook. :)

Meead, I drove inside the Gaza Strip a few times back in 1968-69 when it was still possible to bring foreign tourists in tour buses there. But that was before the current generation of Hamas militants was born.
What can I tell you. . .? All I know is what I read and what I see on Internet TV, which is what everyone has access to.
Your post today is not an easy one. I wish in your photo there had been a counter-protest group saying "End the 60 Kassam missiles and 20 mortars that Gaza has fired at southern Israel in this last week."
There is an editorial in today's Jerusalem Post that shows some facts about what outsiders like to call "the siege on Gaza." See
http://www.jpost.com/servlet/Satellite?cid=1226404716066&pagename=JPost%2FJPArticle%2FShowFull
It also has a video of the UNRWA Gaza rep talking. This U.N. organization we know, but I'm not familiar with the OCHoPT you talk about. Yes, B'Tselem we all know.
Now I have to go cook for guests coming!

I love number 2. Pity if this bridge goes down!

Lovely shots and it would be such a shame to take the bridge down!

Shalom friends, thanks for your ideas and reactions.
I think the new mayor sees this whole project of tram and bridge as pouring money into a bottomless pit. The building of the rails and the completion of the bridge are way way over budget and years behind in schedule. Meanwhile, for years our main roads are reduced to narrow and congested little streets.

I guess you need some rain there? Great sky photos.

Lovely shots. Thanks for your contribution to SWF. Have a great weekend.

As we say over there, "Faire et défaire....Do and Undo"that's our today world.
The bridge gives on your Jerusalem Sky, it looks like an harp.

Nice photos Dina..
I have rea the text too...

Happy SWF, its so amazing that they just stopped doing the project.
Nice photos of your amazing place.
Happy SWF.

Love the clouds and the bridge is spectacular! Thank you!

I really like the second photo of the bridge. Very interesting. Politics and absurdity go together.

The world is a very absurd place, but it does create some ingenious photography and writing.

at first when i saw the second photo i thought it was in london.

Funny to hear someone excited about clouds as a clear, blue sky is unusual here...

Beautiful skies and an interesting bridge! The mayor may find it will cost as much to remove the bridge as to complete it. Education and culture centers will be of no use if the people cannot get to them.

Very beautiful pictures for Sky Watch, the white clouds are so intense! I agree about the bridge: I think that a functional and nice bridge is education and culture too.

Love both shots, but that second one has an unusual perspective that is quite fascinating!

Great shot of the bridge! How absurd to pull it down again. I'm all for spending money on education, but why destroy something that you already have spend so much money on and that will bring people faster and easier access to the city?

Very beatiful shots of the clouds over Jerusalem!
We saw the bridge under construction in march this year, and found afterwards what it was.
A very magnificent mark of modern Jerusalem - I think it is a beautiful construction! It seems meaningless not to take it into use!

Thank you for the visit to my blog.Perryville a nice size and I bet a much calmer place then Jerusalem. But much more excitement in Jerusalem. LOL my sister lived in Mayflower Ar. on the lake but now in Maumelle Ar.
Patsy

It does seem aesthetically pleasing.

Every city has its extravagant waste. My canadian city paved the city square and demolished the work and spent billions on a new square.
It is nice but when you look at the rest of our needs you wonder if it should be.