.
I've long been wondering how to use this funny photo. 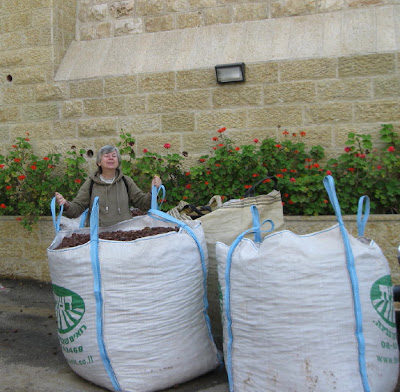 The meditation that appeared today on a favorite Orthodox Christian website may have the sought connection.
Here it is, from Word from the Desert, Meditations on the Orthodox Life from the Early Church Fathers, Ascetics, Saints and Righteous:

An old man said, “There are monks who do many goods works, and the evil one sends them scruples about quite little things, to cause them to lose the fruit of the good they have done.
When I happened to be living in Oxyrhynchus near a priest who gave alms to many, a widow came to ask him for some wheat.
He said to her, ‘Bring a sack and I will measure some out for you.’
She brought it, and measuring the sack with his hand, he said, ‘It is a big sack.’
Now this filled the widow with shame.
I said to him, ‘Abba, have you sold the wheat?’
He said, ‘No, I gave it to her in charity.’
I said to him, ‘If you gave it all to her in alms, why did you complain at the amount and fill her with shame?’”
.
Posted by Dina at 1:21 PM

I have seen these oversize sacks around, but I think the priest didn't have enough wheat for this...

What a perfect shot for this parable! And VP must be right. In any event, I'd hate to have a sackful like that full of shame! :-D

A common word.. In our language it is sadaka..Interesting photo..

Dina - you look small next to those huge bags! You had better get some strong armed help!

That is a funny photo. I liked the story. Unfortunately I have see to many times when those who are giving make the recipients feel ashamed.

I love it!
I was reminded of the passage, "One who gives grudgingly loses his merit even if the gift is very large..." (Mishneh Torah 9:4, Aruch HaShulchan 249.13)

By the smile on your face, you don't appear to run this risk!

The bags are huge!

Oh yes! That's a wonderful lesson and it goes well with the photo. I always LOVE seeing you in your photos!