Police horses on a calm walk 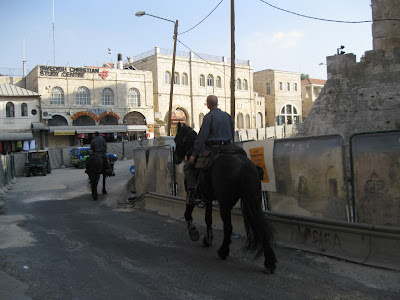 First time for me to see horses inside the Old City walls.
.
At least these mounted police were not in riot gear as they are when they ride security for the Palm Sunday procession from the Mount of Olives.
.
Maybe they were just headed to the nearby Kishle, around the corner from the Jaffa Gate.
. 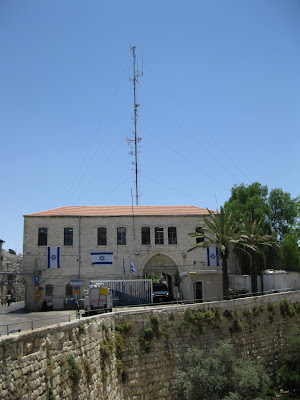 Now an Israeli police station, it was built in the late 19th century by the Turkish governor as a military garrison (Kishle in Turkish). During Turkish rule and later, during the British and Jordanian periods, the building served as a jail.
The street looks a mess because of infrastructure improvements going on.
.
The horses are for Camera-Critters Sunday.
.

Interesting post and photos! I do not think I would like seeing the mounted police in riot gear.

Very pretty, and interesting. There's such a sense of history in every one of your photos.

I always admire a rider of a tall horse like those. Very regal!

Good photographs.
People think we're used to mounted police here in Canada, but most Mounties use cars. However, they all learn riding at the police academy (or at least they used to) and they are a magnificent sight when dressed in their red uniforms.
These policemen, and their horses, look very calm and certainly not stressed. So nice for you to see them that way, when they are just men on horses, and not guards or even peacekeepers.
-- K

It certainly does look like an official stronghold of some kind. It just amazes me how you know the history of all these places around you!

Nice shots, I have never seen mounted police within the Old City walls...

Don't think I ever want to see police in riot gear, but on a horse is cool.