.
For the weekly That's My World tour, let's stroll down Jerusalem's Mamilla Mall at night. 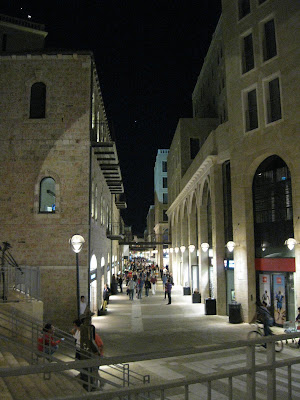 It is so lit up that I never used the flash. 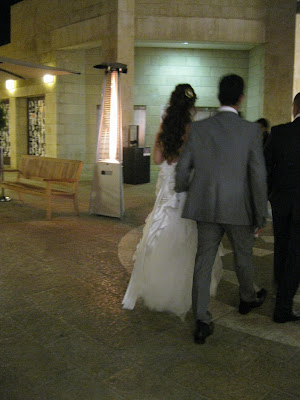 A bride and groom were walking with some friends.
Behind them, a "pillar of fire," if you needed warming. 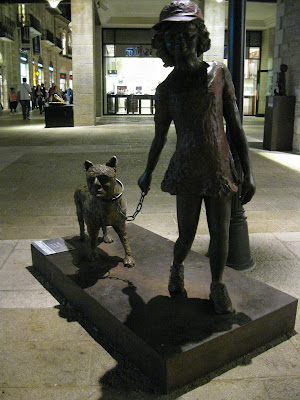 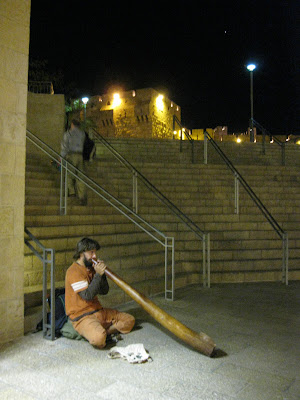 Not often that you see a didgeridoo in Jerusalem.
Behind the busker is the Old City wall, Jaffa Gate, Tower of David.
. 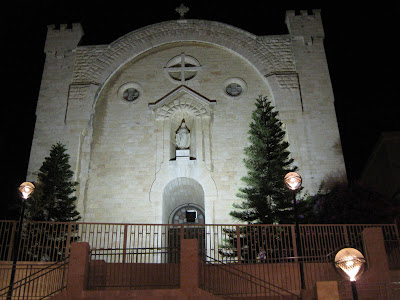 Before there was the mall, there was the church.
It is an impressive sight tucked in between all the stores.
I think it is the French Hospice of St. Vincent de Paul.
.
The mall by night is quite nice.
Of course, I never go into its fancy stores. Taking photos is more fun--and it's free!
.
Posted by Dina at 9:20 PM

Oooh lovely walk, I won't go into fancy stores either.

Looks like you had a fun nighttime adventure at the mall. I'm surprised you didn't need a flash!

No need for flash. Thanks for the walk!

When was Mamilla Mall opened up for business? I don't think I remember it, at least in the evening.

Past, present and future melted into a city - how hope providing. Please have a good Tuesday.

Oh Dina, vive le francais to have that church on the mall ha ha.

nice photos.
Does that busker need a licence? probably not.

it looks very bright there. and very clean!

One of my dreams is to see Jerusalem. I love the photos. Thank you for giving us a glimpse of your world.

If you have time, do drop by:

Wandering to the Quiapo Church

That top shot looks like a Canaletto! So sharp and detailed.

What a nice stroll, how many attractive views by night, I seem to be there.

Beautiful night shots! But why a bride and groom would go "malling" on their wedding day totally escapes me.

Your last paragraph could have been me talking about the more high-end shopping centers of Manila.

No fancy stores for me, I'll take pictures from every corner!

Shalom friends and thanks for commenting.

For your questions --
Hels, the mall is very new. First phase opened in 2007.

Madeleine, I doubt if music-making kids who come and go need a buskers license. Will try to find out if we have any such laws.

Halie, shalom. Hope you can come to visit someday. I enjoyed the night shots of your church, too.

Petrea, Canaletto?! I *wish* I had pics of Venice.

Pietro, if you feel like you are there at the mall, I feel like the photos have succeeded. :)

Hilda, "malling," that's a word? Good to know. I too could not figure out what the couple were doing in the mall. But the public enjoyed them and said "Mazal tov!"

VP and everyone, ALL the stores in this mall are fancy.
Wiki says
"The $150 million, pedestrian-only Mamilla shopping mall has been touted as a luxury destination in the style of Los Angeles' Rodeo Drive or The Grove. Its commercial space is leased at $40 to $80 per square metre to 140 businesses, including international names like Rolex, MAC, H. Stern, Nike, Polo Ralph Lauren, Nautica, bebe, and Tommy Hilfiger, as well as local chains like Castro, Ronen Chen, Steimatzky Books, and Cafe Rimon. The mall is also slated to house an IMAX theatre."

The official website with a virtual tour is
http://www.mamilla-jerusalem.co.il/en/?p=113

Nice series of night shots. Jerusalem is such a unique and beautiful town!
Thanks for sharing.
Yoshi

beautiful Dina,
thankyou for your reply to my question.

In any case your magnificent photo captures the melancholy mood of performing on the streets beautifully especially since it is accented by the ancient old city wall and the Tower of David,

There has always been and will always be a song in the street.

It's amazing that you were able to take those photos without a flash and it's so clear. It's a very pretty place.