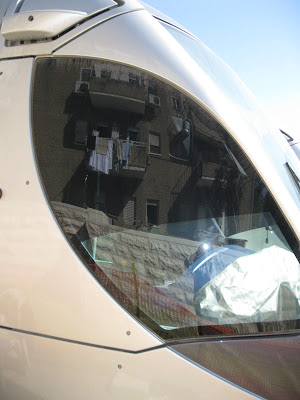 Old-fashioned laundry drying on the line is reflected in the futuristic window of Jerusalem's brand-new tram, especially for James' Weekend Reflections. 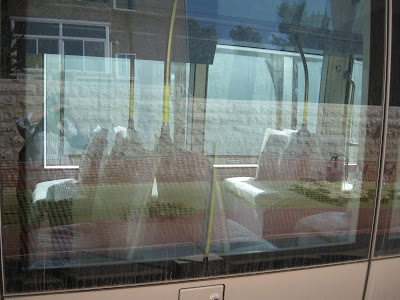 This week I was excited to suddenly see several trams parked next to the Calatrava bridge. My first time to meet them!
The country's first light rail is to start operation in April 2011.
.
This photo is a mess, but conditions were difficult [but not as difficult as with the other tram, which still had opaque coverings stuck on all its windows].
The trams were parked right next to each other, so you can see the windows of the second one through the windows of the first one.
The bright sun was shining straight into my eyes, but it does highlight the seats, still wrapped in bubblewrap.
Orange and yellow mesh netting was strung along the tracks, I couldn't get right up to the window; and so you have the netting, a wall, me, and apartment buildings reflected.
Guards were guarding the trains; I couldn't get any closer.
.
CityPass Jerusalem Light Rail Transit states that the initial rolling stock are to be 46 Citadis 302 100% low-floor units manufactured at Alstom's Aytré factory in France.
Each train will include two carriages, meaning a total capacity of 228 passengers.
Each carriage has 56 permanent seats and 8 folding seats.
.
Oi veh! That comes out to 4 passengers per square meter!
.
Posted by Dina at 3:33 PM

Congratulations - we just got one too.

Dina, your sense of humour has me laughing out loud. I bet you have a perfect poker face while you write: This photo is a mess... I'm sharing your excitement about these new sleek trams. Enjoy a lovely weekend.

We have the same Citadis tramways in Barcelona!

That is exciting. Mazel Tov!


שבת שלום with Aloha from Honolulu

Two different kids of speed. Great pictures. Please have a good start into the weekend.

All aboard! I love riding light rail like that - we have it in the Twin Cities, too! (it's just a rare occasion when I get to ride it)

Your shots are just a nice way to discover the brand new way of locomotion in your city... Thanks for the sharing !

I like the reflections in the photos. Makes them so interesting

I am so jealous! Those trains look so space age.