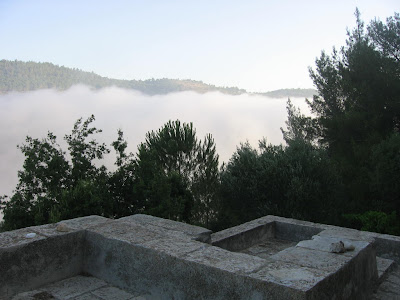 Some mornings our village on the hill wakes up to a cloud of fog sitting in the valley around us.
.
Last Monday night and Tuesday morning we had no fog in the Jerusalem Hills, but 45 minutes west of here Ben-Gurion International Airport was totally covered with fog.
So thick it was that the airport was closed to landings and take-offs for 8 hours, something unheard of in Israel.
.
Apparently the fog could occur intermittently but instead of joining queues over Israel, the pilots chose to land safely in Cyprus, Jordan, and Egypt and wait until they could guarantee a landing at Ben-Gurion.
Thank God for nice neighbors.
.
But why is our "alternative airport" in the neighbor countries and not in Israel itself, we started wondering.
Ovda Airport near Eilat used to serve that purpose but it is owned by the military.
.
And as Transportation Minister Katz said yesterday,
“Most countries have an air force; in Israel the air force has a country. The main problem is that even when the government decides that an alternative airport is necessary, the air force expresses reservations and things don’t go ahead."
Haaretz has a very telling interview with El Al Airlines chief pilot in which he explains the sorry situation, and why Ben-Gurion can't use its ILS instrument landing system, and why fog can shut down the country.
Catch 22.
.
Posted by Dina at 1:50 PM

"Most countries have an air force; in Israel the air force has a country." Funny expression at the first reading, but thinking more about it, not so funny.
And certainly not the best situation for airplane travelers.

The fog was really thick! I think in Ovda there was not even enough place for all these flights. And maybe it was foggy there as well.

Fog - a cloud on foot. May it lift you all up into a peace- and happinessfilled Friday.

Dina, sometimes do you feel like you're in a fog?

I live just a few minutes away from the airport and the fog that day was unreal - I literally couldn's see across the street, it was a complete whiteout. (In fact, I snapped a quick photo that was, I kid you not, entirely white.)

Wow, what dragon has awoken there?
Stunning picture, Dina.

My opinion is that without Air Force you won't have a country, so the trade off seems quite fair...
I don't know how often this fog happens, but if it is once in say ten years, it easier and cheaper to bear it. Except for the people flying on that day!
Before the peace treaties this would have been a nightmarish situation.

Fog.....closes airports and teases you into thinking that water is soon to follow. Sometimes it is nice for humans to remember that nature is a more powerful force than we are. Not always convenient to humans.

A beautiful photo. So thick like whipped cream. It always reminds me of that. I enjoy fog but not when it stops us from using our means of transportation....

How very unusual! Does that mean it's getting a little more humid for you now, Dina?

That is quite cool. We don't get fog much in Hawaii either.

We're going through a lot of brouhaha about the airport security in the U.S. I heard that Israel has a really efficient, terrific security system that the U.S. needs to learn and employ.