Russian bridge to a WC in Jerusalem

.
Will this qualify for Louis la Vache's Sunday Bridges, you think?
. 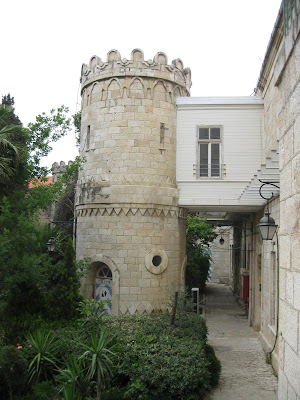 Here's the story as told by Aviva Bar-Am in The Jerusalem Post:

"Russian pilgrims began visiting the Holy Land en masse in the middle of the 19th century.
To provide for their needs, several hostels were constructed inside the Russian Compound within walking distance of the Old City's holy sites.

But none of these hostels was fancy enough to house the Russian aristocracy.

The nobility preferred the elegance of Beit Sergei, built in 1890 on the initiative of Prince Sergei Alexandrovitch, brother of the ruling czar.

The complex included stately visitors' rooms, bathrooms and showers, dining rooms and cisterns.
The first floor was the service area, with a reception hall, kitchen and other rooms.
On the second floor were 25 rooms, half of which were fairly plain and the other half elaborately furnished with Persian rugs, silk wall hangings, plaster sculptures and brocade curtains.

On weekdays, you can walk inside to view two squat towers within the courtyard that held the bathrooms; indeed, bridges leading to the upper stories are still in place."
- - - - - - - - - - -

And today, 120 years later, the public toilet is located in the bottom of one tower!
It is one of my favorites, always clean and with TP. : )
.
(More pictures of Sergei's Courtyard here, here, and here.)
Posted by Dina at 7:00 AM

ROFL. Love it. You do find the best subjects.

«Louis» says it qualifies and he's happy you posted it!

You bet it qualifies! This is too too cool! It's very fairy tale castle like. TP too? Great!

You come up with the most interesting turns on the bridge concept. I always thought living in a tower would be fun.

I think this is a nice looking bridge with a most interesting story!

Might win the prize for the shortest bridge this week but it's still a bridge. Very interesting story too.

One could say that we are back to those times with some Russian oligarch...

The old Thebes (Ouaset, The Powerful) is on Blogtrotter Two waiting for you!! Enjoy and have a great Sunday and week ahead!

Interesting architecture and story behind it.

Absolutely perfect bridge to the tower... :-)

Well, it's a bridge, so Louis will be happy!
Thanks for the link, happy to read this in the JP!!!

How pretty! I'd love to have one like it installed.