The tram, the tram! 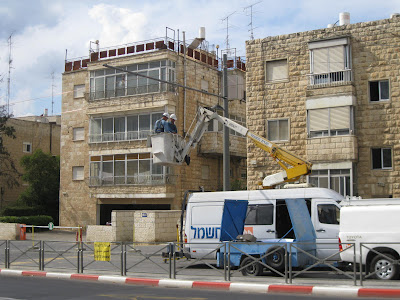 I really got a charge out of this scene today!
The electric company had two trucks on the Herzl Street tram rails, and in each cherrypicker were two workers.
They were connecting the overhead wires that will power the new tram. Yay!
.
It was so exciting that I got off the bus midway to the shuk in order to take pictures.
. 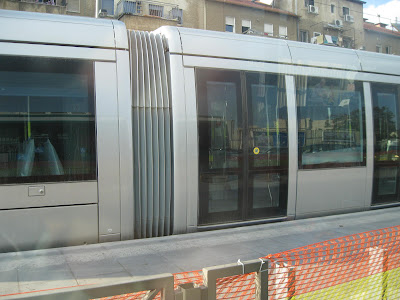 A few hours later I was on the bus coming back from the market.
Suddenly I looked out the window and saw empty light rail cars sitting on the tracks!
My first time to see them in person!! 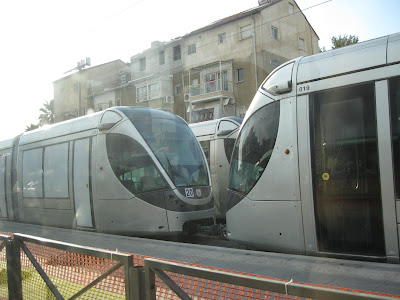 Are they not sleek and beautiful?! 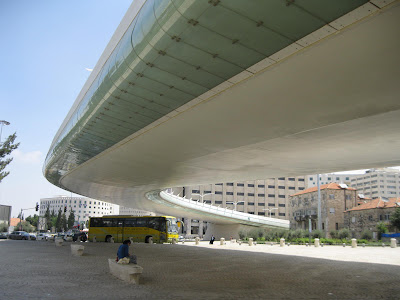 They were parked just beyond the Bridge of Strings.
I suspect they will be tested on the bridge tonight, maybe, I hope . . .
.
Two weeks ago, starting at midnight, a tram went on the bridge for the first time, but not on its own power.
The Jerusalem Post reported that "A specially-designed truck pushed the first train over the span, allowing exact measurements to be taken. They were 'static tests,' allowing the engineers to measure weight and stress on the structure.
It took a full two hours for the first train to cross, as engineers stopped every meter to take readings and make sure all was running smoothly."
.
With the electric lines that were hooked up today, the next trial run can be dynamic tests instead of static tests.
.
That's today's progress for That's My World Tuesday.
P.S. On the truck in the first photo is written chashmal.
I posted once about how modern Hebrew adopted this word from the prophet Ezekiel's mystical vision.
.
Posted by Dina at 8:39 PM

Wow! Wonderful I think! I remember they where digging..looking forward to see them in real life:-)

That does sound exciting, Dina... and yes, those are sleep and modern looking trains! [I joined the CDP fun yesterday... and hope you don't mind my linking to you!]

Those are beautiful trains or engines and cars. I think they are as beautiful as those in France or Japan.

Robin, now now, be patient. Just because the tram is 4 years behind schedule . . .

Spiderdama, starting in April you may be able to ride the tram. Yes, they have been digging our streets for years.

Francisca, I'm honored by your link to Jerusalem Hills. Your public transport post from Nepal is amazing.

Abe, shalom. I think they actually are made in France.

It's funny they test the bridge. And what would they do if it is not strong enough? Pull it down or what?

How far will the new system extend

Being an Australian, of course I am totally in favour of trams and light trains going into every important city in the world. My only concern is the Jerusalem streets - are they suitable?

You are years ahead of us!
We are still arguing over rapid transit, and will probably not get sleek cars like those. Mazel Tov!

Always a safe ride ahead for you. It is indeed the most used vehicle over here, at least for me.

Please have a wonderful Tuesday.

That sounds cool.
That bridge structure sure is interesting

OUi! Very sleek and seem to be very FAST! Our city has nothing this wonderful.
V

Excellent! Those trams certainly do look futuristic. I wish they'd put together some public transportation in my city.

This is so exciting. Hawaii is planning to have a rail system, too. If they can only get their act together.

You are running very elegant French Citadis cars, even newer than the ones in Paris!

What an exciting time for you. I do hope your trams work better than our new ones built in Germany where the airconditioner broke down in the height of summer because it was too hot outside!!!

Mo, the route is from Pisgat Zeev neighborhood in the north of Jerusalem, continuing along Yekutiel Adam St., the Shuafat neighborhood, Bar-Lev Boulevard ( Road No. 1), Hatzanchanim St., Jaffa Road, the Central Bus Station, Herzl Boulevard, and terminating at Mt. Herzl.
Hopefully someday the light rail will be extended closer to my village, i.e. from Mt. Herzl to Hadassah Ein Kerem.

Yes, they are beautiful and I also like the perspective of the bridge.

Friends, thanks for your comments, all so interesting.

Anumorchy, I remember reading, several years ago, that the Calatrava bridge was the first curved, suspended, and train-carrying bridge in the world. Or maybe the only. Let's hope is works!

Hels, well, Jaffa Street is slated to become a pedestrian mall so the tram will be on its own. Sometimes the tracks are in the middle and sometimes on the side of the streets.
Let's hope the pedestrians, kids, drivers, and bike riders will know how to co-exist with the tram.

Arija, that reminds me, they started building the track foundations with a special machine brought from Switzerland but it broke down, not suitable for Israel's ground.