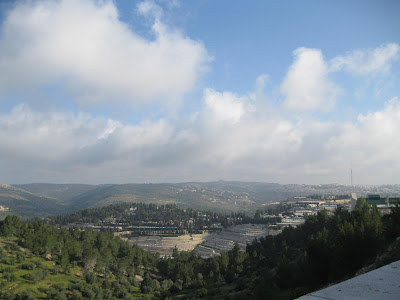 The white bits you see on the two slopes are only part of Jerusalem's largest cemetery, opened in 1951.
As the official municipal burial ground, Har Hamenuchot accommodates free burials for Israeli citizens, although the choice of plot is left to the municipal chevra kadisha (Jewish burial society) and if a spouse wishes to be buried in the adjacent plot, he or she must pay for the second plot. 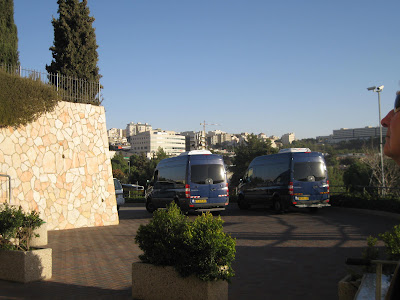 An elderly neighbor died Tuesday night, in her home, in this moshav (collective agricultural village) of which she was a founding member.
She was a real pioneer in 1949, when this future lovely village was but a barren hill.
.
From the Chevra Kadisha vehicle the covered body is brought by stretcher into the "beit hahesped." (In Hebrew this means, literally, the house of eulogy.)
. 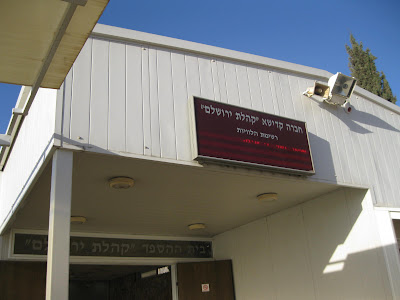 The name of the deceased and the time of the funeral is written in red on the digital sign above the beit hesped (funeral chapel).
I read that in busy times each funeral is given a half-hour slot.
. 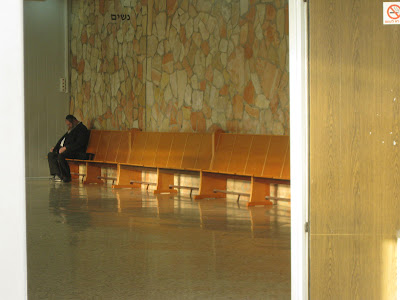 The funeral chapel is simple: one long bench with fold-up seats along the side wall for men and one along the opposite wall for women, a lectern, and a bier on which the stretcher is placed.
(The man on the bench, one of the Orthodox Jews who lead the funerals, was waiting for the mourners to arrive.)
.
When it was time, the body was carried in, the son said the Kaddish prayer, and the collar of his shirt was torn as a sign of mourning.
The men of the family carried the stretcher back to the van, Kaddish was said again, and then the body was driven as close as possible to the grave site while we walked to the plot.
.
More prayers, very moving actually.
Then the moment of truth when the body is laid in the grave. We in Israel do not bury our dead in a coffin. It is a very striking realization of the fact that from dust we came and to dust we shall return.
.
The men who are willing and able take turns returning the loose earth into the open grave with a turia ( hoe).
A temporary sign with the deceased's name is stuck in the ground.
After the official part of the burial, each one comes close and puts a pebble on the fresh grave as a final goodbye.
.
Yes, the founding generation of the moshavim and kibbutzim and of the State of Israel is passing on.
I thank them for their dedication, hard work, and idealism that gave us a home.
May they rest in peace; and may we, the living, also know peace.
.
Posted by Dina at 5:14 PM

Very nice picture, and your blog as a whole is nice to read and watch. I like your blog very much. Come take a look Teuvo images www.ttvehkalahti.blogspot.com blog and tell all your friends why you should visit Teuvo pictures blog. Therefore, to obtain your country's flag to rise higher in my blog. September Sincerely, Teuvo Vehkalahti Suomi Finland

What a beautiful vista! A proper final resting place.

I like the idea of not having an ostentatious, elaborate coffin actually. We'll be cremated when our time comes.

Dina, you do an amazing job of reporting your culture, here and throughout your blog. Burial rituals are such an important part of every culture - although perhaps oddly our family does not engage in such; we opt to be cremated and thrown into nature or the sea at a favorite place - and hence I appreciate the symbolism of not having a coffin - from dust to dust, indeed. Peace to you and your neighbour's family.