.
A quest for quarries today, for ABC Wednesday. 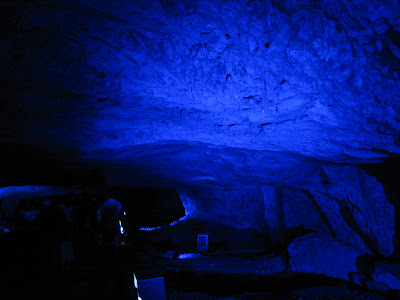 First, let's see two ancient masonry stone quarries in Jerusalem.
.
The photo above was taken underground during the Jerusalem Light Festival, hence the eerie blue color.
.
This is the huge quarry beneath the Old City from which Herod the Great took the "Herodian stones" needed to renovate the Temple and its retaining walls, including the Western Wall.
.
We call it Zedekiah's Cave, but, as a fascinating article in The New York Times says,

"For the Freemasons, the cave is definitely Solomon's quarry, making it one of the most revered, perhaps the most revered, site of their international secret society. The organization considers King Solomon the first Freemason, and its tradition of doctrines, passwords and symbols derives from the building of Solomon's Temple in Jerusalem. In the absence of the Temple, Freemasons revere the quarry, and they hold an elaborate ceremony inside the cave once a year. " 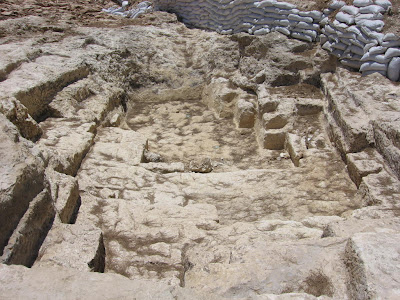 This thousands of years old quarry was found when I worked at a salvage dig of a Canaanite cemetery.
Today the area is covered by the awful Holyland Park residences. 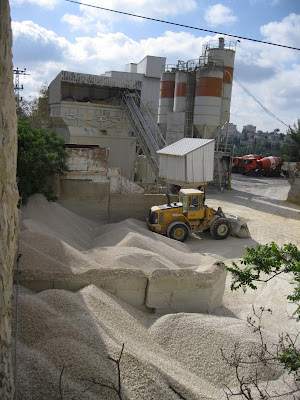 Moving on to modern quarries, here's one in the Givat Shaul neighborhood.
It looks like the cement mixers fill up on site and drive out to their construction site. 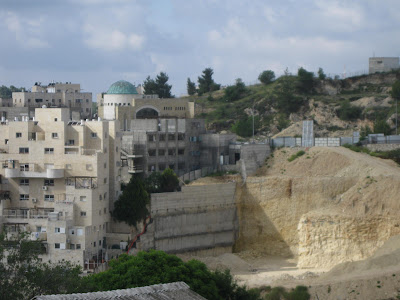 Today the apartments and yeshivas have come right up against the old quarries.
The area used to be Dir Yassin . . . .
. 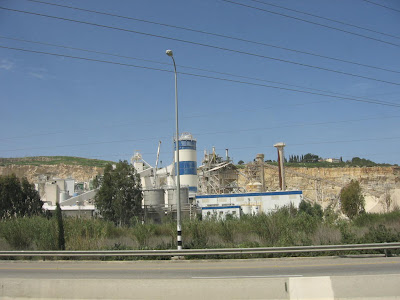 Further north, toward Haifa, this quarry is biting into Mount Carmel.
.
The Jerusalem Post reported in 2008 that our Minister of National Infrastructures "warned that there would be shortages in raw materials by 2020. There are currently 80 working quarries in Israel, and about a thousand which have been tapped out and are in need of rehabilitation. However no new quarry has been approved by the national planning council in the last 14 years."
.

But my favorite quarry photo is this memory of the great five days I lived in the village of Darajat, studying Arabic.
(For more about it, see under my label Darajat.)
Our Bedouin hosts took our small group up the mountain for a hike and to see the quarry in the Negev desert where they work.
.
Hope you don't have dust in your eyes after looking at all these quarries. Shalom!
.
Posted by Dina at 7:43 PM

Thanks for the interesting tour of quarries. I had never heard before that Freemasons consider Solomon the first.

The Holy Land has no shortage of quarries! I think your country is so rich in history that there will never be an end to digging!
Thanks for sharing this interesting information.
Thanks for visiting my blog. Isn't there something of a Don Quixote in all of us? We all "dream the impossible dream".

An interesting tour round your 'local quarries' - the whole area must be a honeycomb!

Love the blue light on the first. Always interesting visiting here virtually,such a historical part of the world.

i'm afraid the natural resources will run out, tho the history will still be there.
ROG, ABC Wednesday

shalom beautiful Dina, how did you know that I had a weakness for blue light
thankyou for this penetration

A very interesting tour - thank you!

Interesting! Thank you for the guided tour! Love that first blue photo.

I think my favorite is the last one, it is interesting to see that Dir Yassin is a place like another now.

Dina, what a great Q post. A personal angle for me: I am told that my grandfather was a Freemason in Indonesia, with a lodge named after my grandmother somewhere (I've been meaning to try to find it); and it seems odd not to know more about these people. My curiosity is peeked whenever I hear something about them. Had no idea about Solomon's quarry. Amazing view in that last shot. How good is your Arabic? My father was fluent.

[The hexagram you saw on Huymayun's tomb, of course, is not only the Star of David for Jews, but also for Muslims, as the Mughars were. I'm posting a few more images of that tomb in a few hours. :-) ::: Not sure those eyeglasses made from quartz crystal are very good for driving a motorbike; I read that the magnifying is not as stable as glass. The road ahead might look a little warped. :-D ::: And just tell me to keep it shorter if I'm writing too much... yikes!]

Hi! out of hospital and surgery successful, but it is not a walk in the park. At library, pecking with one finger. Really pushing myself in all areas. Need to buy a computer since my old one crashed...with all my photos.
i will post comments whenever i can...really miss you guys!

Dina, the last shot is definitely my favourite. I just love the place and colours!

again an intresting report .. which lightens my day tks

This is so very interesting, Dina. It's so amazing how much history there is under and over every stone.