.
For Armistice / Remembrance / Veterans Day let me show you where some of the soldiers of the Great War are buried or memorialized in Jerusalem.
. 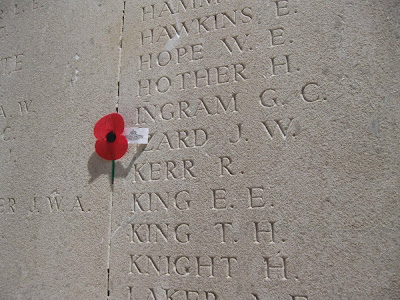 At the outbreak of the First World War, Israel (then called Palestine) was part of the Ottoman Empire, and it was not entered by Allied forces until December 1916.
The advance to Jerusalem took a further year.
The Turks surrendered the city to British General Allenby (but first to two British army cooks) in December 1917.
. 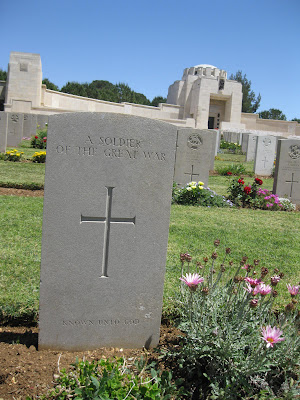 The Jerusalem War Cemetery is the British military cemetery on Mount Scopus.
Of the 2,515 Commonwealth burials of the First World War in the cemetery, 100 of them are unidentified.
.
For more about this beautiful place, see my posts under ANZAC.
. 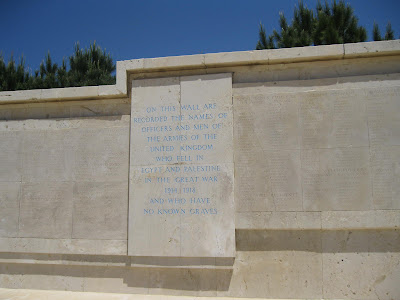 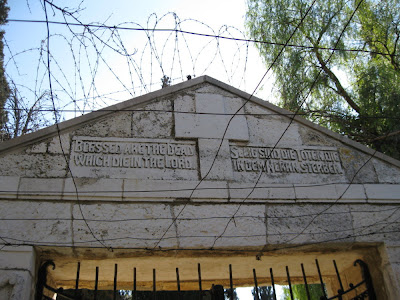 On Mt. Zion, in the backyard of Bishop Gobat School, under lock and key, is the Jerusalem Protestant Cemetery.
.
It was owned by the British and German religious congregations and contained the graves of 114 British soldiers, buried from March to December 1917 by the enemy, and then, until February 1918, by the British forces.
.
(Many famous Christian civilians are buried here as well.)
. 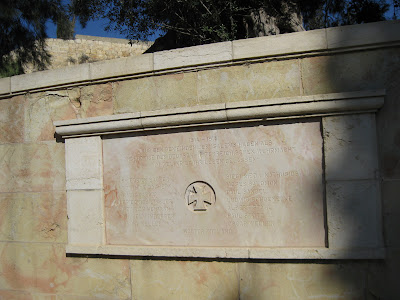 The Protestant cemetery even has this (enlarge the photo if you can read German) for 15 members of the local congregations who joined the German-Austrian Wehrmacht and lost their life during World War I.
. 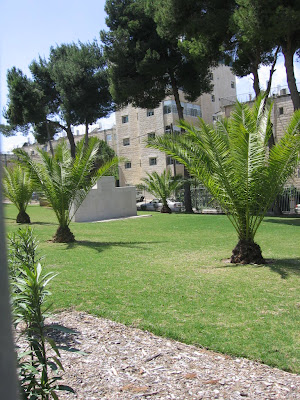 In the Jerusalem neighborhood of Talpiot, you will find (if you know what to look for) a small park in front of a playground.
.
The Imperial (now Commonwealth) War Graves Commission was set up only toward the end of World War I. Before they starting making centralized and uniform cemeteries, it was common for their soldiers to be buried near the battlefield where they fell.
.
So, as Yad Ben-Zvi Walking Tour Guide explains about these markers shown in the photo above,
"In World War I, the bodies of 290 Turkish soldiers were buried nearby in a common grave. Between July 1918 and June 1920 Indian soldiers serving in the British army were interred close to the common grave of the Turks.
They were buried in two different common graves since 31 of them were Muslims and 47 were Hindus, Sikhs, and Gurkhas.
The tombstone over the Muslim grave bears an inscription from the Koran, while above the other common grave is an inscription in Sanskrit.
The names . . . are recorded in the chapel of the British cemetery on Mount Scopus."
.
Sigh . . . so many young men, sent from far corners of the world to fight and die and be buried in the Holy Land.
Let us remember them.
.
Posted by Dina at 2:24 PM